Dikembe Mutombo will lead the 11-member Class of 2015 into the Basketball Hall of Fame.

Dikembe Mutombo is heading to the Naismith Memorial Basketball Hall of Fame, as he’s been selected among the 11-member Class of 2015, which was announced today.

Calipari led Kentucky to a 38-0 record before Saturday’s season-ending loss to Wisconsin in the national semifinals.

Candidates for the 2015 Class needed at least 18 of 24 votes from the honors committee to be inducted.

The enshrinement ceremony is scheduled for September 11 in Springfield, Massachusetts.

Kansas: 'There's No Place Like Home' to Carry a Concealed Firearm Without Needing a License

Reports say that Derrick Rose has been sued by a woman who says Rose and two of his friends “drugged and gang raped her.
byBrennen Jones 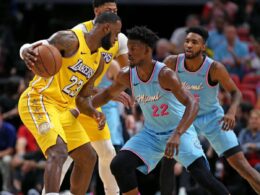 March Madness: How to Predict a Perfect Bracket

Nearly all collegiate basketball enthusiasts are emphatic this time of year. Why? March Madness, that's why. So how do you correctly predict every match-up?
byMatthew Rash