Traditions around the world for celebrating the new year vary just as much as the days celebrated. In America it is traditional to have a party, eat black eyed peas, and make a resolution. How do other cultures ring in the new year?

The  year is  coming to a close and  it’s that  time of  year when  we start to reflect on ourselves and the events of our lives throughout the course of the last year. We promise to  be better people, to eat less and exercise more. Every year we party hard and make these  same  promises to ourselves that this year will be  different.

While we are counting  down the   minutes until the  ball drops it’s  sometimes hard to remember that the  world is full of different cultures and  countries. While  we may all observe the same holiday, in truth,  we often celebrate them at different times of  the year as well in many different ways.

New Years Eve, as we  celebrate here in America as well as most Christian and all European countries is  always December 31st. The date  is set by the Gregorian  Calendar which was introduced to society in  1852. The calendar  was originally reformed from the previous Roman  calendar to  bring the date of  Easter  around to the  start of spring.

In   the United States the most  widely attended  celebration is  held in  New York’s Times Square annually. Close to a million spectators take to the  square for live concerts and entertainment followed by a  midnight  countdown with a huge ball drop to start the new year. This  huge  celebration  has been taking place in  New York since 1907 on radio and  has  been televised since 1956.

At the stroke of  midnight we   have grown  accustomed to the  sound of  fireworks,  champagne bottle popping and  the  tune of  “Auld Lang Syne” which is often used to symbolize an end or new beginning. The song was originally published in  1799 by Robert Burns and was  made popular  as a song associated with the  new year by Guy Lombardo. Lombardo was the band leader whose  orchestra  played the live radio and  later television  broadcast  on  New Years Eve from 1929 to 1976.

Not  everyone  celebrates the new year at the  same time or even in the same way  that we  do. Let’s look at how and  when a few other cultures  celebrate the beginning of a new year.

Indonesia has two New Year celebrations, one on January 1 and another on the Islamic New Year.

The Russian Orthodox Church observes the New Year on January 14.

In Vietnam the new year usually begins in February.

Morocco observe the beginning of the year on the tenth day of Muharram, the first month of the Islamic year.

Traditions  around the  world  for  celebrating the  new year vary  just as much as the days  celebrated. In America it is  traditional to have a party, eat black eyed peas, and make a resolution. How  do other cultures ring in the new year?

Russia: One New Year’s custom in Russia is to write a wish for the upcoming year on a piece of paper, then to burn the paper and place the ashes in a glass of champagne, which needs to be consumed right before the New Year is rung in for the wish to come true.

Philippines: One of these is to open all doors and windows in your house on New Year’s Eve in order to allow negative energy to leave and good energy to enter.

Spain: Spanish tradition holds that eating 12 grapes just before the clock chimes midnight will bring good fortune for all 12 months of the upcoming year.

Thailand:  A 3 day water festival on April 13–15 marks Songkran, the Buddhists’ celebration of the new year. Parades feature huge statues of Buddha that spray water on passersby. In small villages, young people throw water at each other for fun. People also release fish into rivers as an act of kindness. At Songkran, people tie strings around each others wrists to show their respect. A person can have as many as 25 or 30 strings on one wrist, each from a different person. The strings are supposed to be left on until they fall off naturally.

Scotland: The cannon is fired at Edinburgh Castle at the stroke of midnight, followed by a large fireworks display. Edinburgh hosts a festival of four or five days, beginning on 28 December, and lasting until New Year’s Day or January 2

Is Renting Bad for Your Health?

There are many issues that can affect housing in urban areas, with crowded spaces and a lack of maintenance leading to the need for costly repairs and maintenance.
byTUT Staff 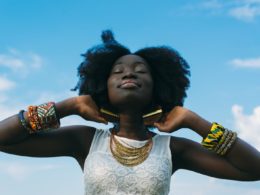 Fresh and Funky Natural Hairstyles for the Summer

The summer translates to time with family, backyard barbeques, and rooftop chilling and chatter. However, if you’re in love with your natural and curly hair, then the summer also means it’s time to experiment.
byTUT Staff

The Dapper Gent’s Guide to Choosing a Hat