Inside the Young Soul of NAS

Author Nicole A. Schmidt takes us inside the soul, and mind of young women as they struggle to find, and embrace their identity.

Writing can be therapeutic.  For some, the ability to flesh out thoughts and ideas on a page, or computer screen clears the mind.  It gives some sort of relief to life’s everyday pressures. The ability to escape those pressures, although just temporarily, is probably one of the best feelings in the world.

Those feelings and expressions are what led me to discover Nicole A. Schmidt.  Call her NAS for short.  And just like her rap counterpart, she knows a thing or two about painting picture with words. 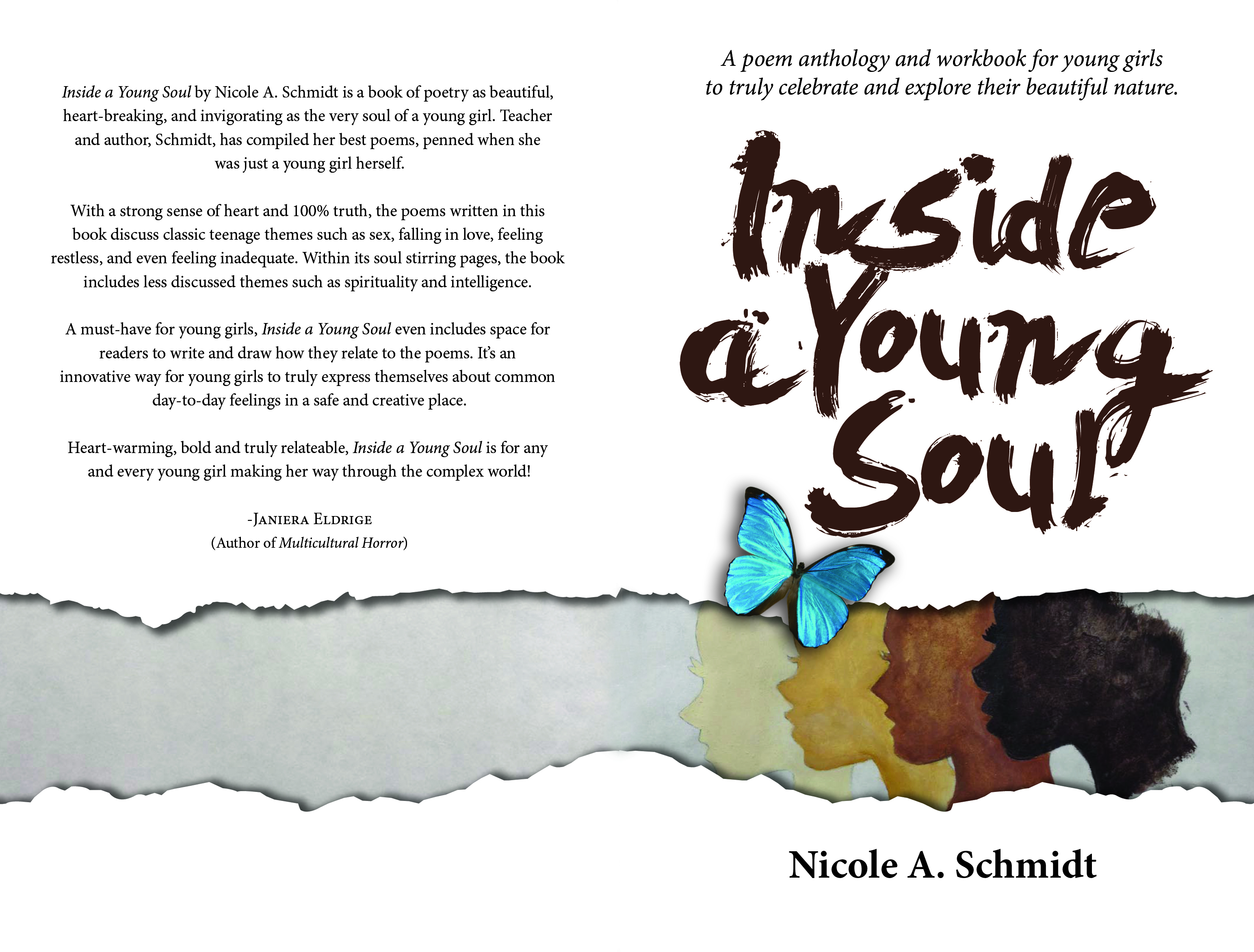 Her poetry memoir/workbook, Inside a Young Soul, is a memoir about the issues faced during adolescence and it’s written in a young girl’s voice, but with enough maturity to be objective about the subject matter.  And although her target audience for the book is obviously teens and girls of color, I found myself able to relate to some of the pieces quite easily.

In her self-titled piece called New Approach to Satisfaction.  NAS for short again, she’s a young woman scorned.  She’s reaching out to all of the so-called men, some rappers, in particular, to step up and become better men.  The men that they are capable of becoming.

With direct bluntness, she makes her point, and voice heard loud and clear.

I am a female scorned, but not old enough to vote
Maybe I’m scorned ‘cuz rappers promote
DISRESPECT
What do you expect…
Young males to do
To young females, when you
Speak of them like meat, trophies, property
Never the queens they are, more precious than the North Star
What about the fatherless female, the brother-less female?
She listens to you and thinks she has no chance…
To be loved

When you consider that this piece is coming from inside of the mind of a young black woman, it makes these words that much more powerful.  How she’s yearning to be loved by someone, but the male figures that she’s surrounded by aren’t living up to her expectations.

In another piece, the titled piece of her book, Inside a Young Soul, she’s a girl conflicted yet again with her surroundings but this time in the classroom.

Only accepted to fulfill quotas – and tolerated to suppress racist egos
You think that I have an equal chance at reaching my goals…
Because I share a class with white, middle-class students, like you
That’s funny and untrue; I have to work twice as hard and be twice as good
Even if it were, that’s not what equality means
We should be equal because we’re all human beings

This character that NAS is portraying, another young woman of color, realizes that she has some extra hurdles to overcome.  Because of her age, she feels she won’t be taken seriously by adults.  Because of her race, when it comes to getting an education when compared to her white classmates, that she has to work twice as hard to reach the same goals as them.

But in the end, she just wants to be their equals because we’re all the human race, once you strip away the color.  Which is how things should be, but her character realizes that they will never be this way so she strives to better herself.

Inside a Young Mind is full of these gems and anecdotal messages that should resonate with young people easily.  As I read through these poems, I found myself thinking back to my youth on how I felt the same way as many of these characters have in these poems.

This is a great collection for young women.  I can’t speak for women because I am not a woman, but young people, in general, are always wondering who and what they are, and this book can serve as guidance to them finding their own path in life.

These poems aren’t to be consumed too quickly, but savored slowly and thoughtfully, reading and re-reading to get the full message.  Would make perfect gifts for the young women in your life this holiday season.

You can purchase the book for just $10 here at Amazon.  You can also follow Nicole here, here, and here.

10 Reason Why Barnes and Noble Surpasses The Library

In many ways, Barnes and Noble can actually be better than your local library.
byChristina Jeter

The former Olympian reveals in new tell-all book that she's gone all the way through with the gender assignment surgery and is now "liberated."
byTUT Staff

Prince Harry and Meghan are prepping for their tell-all book.
byBien Luigi

You have met Rey, Finn, and Poe, but what about some of the other less than noble characters on the build up to "Star Wars: The Force Awakens?"
byChad Mitchell