Never forget that 16 years ago, on 9/11 2001, the American government launched an attack on its own people that killed almost three thousand people in New York, DC and possibly Pennsylvania.

For the last 16 years, the government and the news media has worked tirelessly to convince Americans and global citizens that the horrid attack on the World Trade Center in New York was perpetrated by Osama Bin Laden and Al Qaida. If you believe that, you’ve been properly brainwashed.

There is too much evidence that points directly to our government as the attackers, yet, so many want to believe the government and politicians simply because that is what they’ve been taught to do. This is no different than when a child blindly follows the word of an adult because they were taught that adults are wiser and should be listened to. We eventually grow up, we learn the adults weren’t perfect, they had flaws, they lied, they did bad things. Wake up America, your government is the adult that’s been lying to you your whole life.

Illegal immigrants are your Santa Claus, Al Qaida is your tooth fairy, attacks on civil liberties, there’s your Halloween, debt ceiling and debt crisis, you know money is an illusion, right? Here’s your Easter. The government has trained you on a series of falsehoods the same way your parents did your whole life.

Think I’m tripping? What’s the odds of the same crime happening in more than one place? If a crime was committed twenty years ago and worked, is it inconceivable that someone may have implemented it in another place? History has a way of repeating itself. Do you know about the first 9/11? It did not occur in the United States, it occurred in Chile. 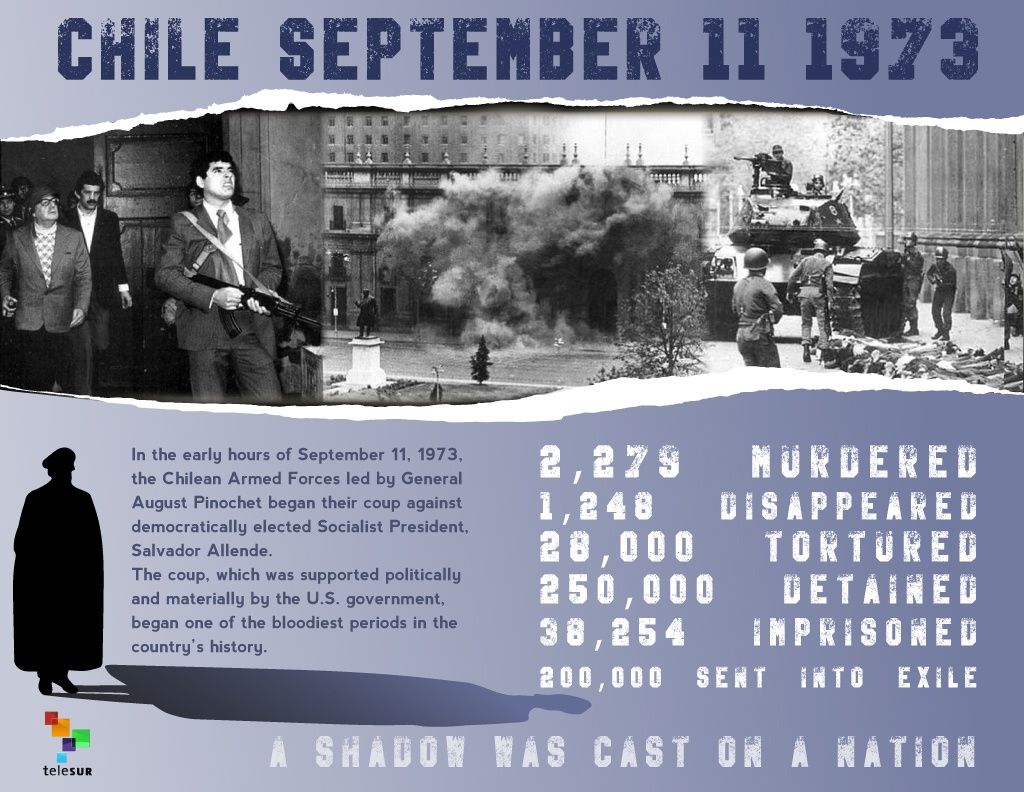 On September 11, 1973, the Chilean government launched an attack on its own people.  There is no way to pretend that the U.S. Government was not aware. In fact, president Richard Nixon had called for economic warfare. This was 1973 it had nothing to do with the 2001 attack, right? Wrong. This hung over the American government’s head for years right up until the 2001 attacks. A report prepared by the United States Intelligence Community in 2000, at the direction of the National Intelligence Council, that echoed the Church committee, states that,

“Although CIA did not instigate the coup that ended Allende’s government on 11 September 1973, it was aware of coup-plotting by the military, had ongoing intelligence collection relationships with some plotters, and—because CIA did not discourage the takeover and had sought to instigate a coup in 1970—probably appeared to condone it.”

Less than a year later, the same attack happened in the United States. Huge coincidence huh? During the attack, air traffic controllers weren’t immediately able to assist with information from the air because by another act of sheer coincidence, they were warned prior that a FEMA drill would be running that morning which involved planes being crashed into skyscrapers. The very people who protect the skies were confused as to whether what was happening was real life or part of the drill.

As the planes hit the towers in New York, I was at work in the book store of Johns Hopkins University. Watching the devastation, our administrators were terrified, Johns Hopkins being so renowned throughout the world, they weren’t sure if they were a target or where the next plane would hit, especially after the Pentagon was hit. They released all students and staff and urged us to get home.

As news started to trickle out about what had happened in New York and DC, the series of events seemed impossible and improbable to have happened the way they were described. On September 11, 2001, we watched planes (which I believe were military plans, not commercial airlines) crash into two of the buildings located at the World Trade Center. Later that day, we watched building seven fall in the exact same manner of the two buildings that were supposedly hit by planes. Building seven was not hit, not on fire, yet it fell on the same day and in the same way as buildings that were hit by planes. I guess that’s a huge coincidence.

Speaking of coincidence, it’s a major coincidence that planes that hit each tower once, above the 50th floor, yet could ignite these fire proof, steel beamed reinforced buildings. Jet fuel does not melt steel. It’s also a coincidence that the planes practically disintegrated, leaving only destruction in their wake. In a situation where no bodies were found of the so-called passengers, what did survive and was EASILY found was the supposed passport of one of the alleged hijackers. It’s almost preposterous to ask someone to believe that a plan can crash more than 50 stories high, kill and disintegrate everyone on board and in its path yet a piece of paper not only survived the crash but was found intact over 50 stories below.

You believe that? I don’t.

From the announcement Donald Rumpsfeld made on September 10, 2001, telling the nation that $2.3 trillion was missing in government fund, to the government offices housed in the World Trade center buildings on the floors hit, the government was given a blessing with the “terror attack.” The attack guaranteed that one, people would stop asking about the trillions missing, and secondly, would provide cover when asked about the missing money. IRS offices and more were destroyed.

After the attack, we launched a war initiative against Al Qaida, Iraq and Afghanistan. The U.S. government claimed it was after Osama Bin Laden, who they believed perpetrated the attacks. Millions of Americans were sent to war. The war stemming from the 9/11 attacks carried on throughout Bush’s next term and into the election of our 44th president, Barack Obama.

When Obama announced that Osama Bin Laden had been killed, I started to celebrate and caught myself. I don’t trust my government and I can cheer for the death of a man I know nothing about other than what the government told me. I did what I always do when I want the truth, turned to books. I picked up “Inside the Kingdom” by Carmen Bin Laden, his sister in law, “Growing Up Bin Laden” by his first wife and fourth son and “The Autobiography of Kola Boof”, written by a woman kidnapped and used as a sex slave by Bin Laden. The more I studied the man outside of the U.S. government’s perspective of him, I came to develop a modicum of respect for him. I then realize he was a scapegoat for the 9/11 attacks.

For the last 16 years, my eyes have been open to the treachery our government is capable of. Until the 9/11 attacks, like many, I was apolitical, had faith in the leaders of the free world and felt that truth would always win out.

After 9/11, I was forced to acknowledge information that I’d heard and learned while being raised in a home ran by a proud Muslim woman. I’d always tried to ignore certain things my grandmother taught me, thinking she was a little weird. She wasn’t. She was highly enlightened. These days, I am proud to say that I have my grandmothers spirit and tenacity for reading and researching, for seeking truth over propaganda.

Ask yourself this, if the U.S. government is not responsible for what happened to those murdered on 9/11, why has it  paid out so much to the families in cash and medical expenses and  blocked the families from suing the nation our government blames the attacks on?

Read more of My articles at https://theurbantwist.com/author/sapphirehill/

Like It or Not, the Miami Heat are the Next Great Dynasty

Last night the Miami heat defeated the San Antonio Spurs to win back to back NBA Titles. LeBron James took home his second NBA Finals MVP award and it's looking like the days of the heavy Heat criticism could be behind us. Now we are watching history in the making.
byEverick Davis Jr

Nina Simone: When The Black Hand Side Is Still Too Light

Has Nina Simone's legacy been reduced to being portrayed in blackface? Apparently, dark skin is unacceptable even when you're dark-skinned.
byNegra With Tumbao

When Ratchet Goes Viral and Gets Exploited: Who’s Going to the ‘Cash Me Outside’ Tour With Danielle Bregoli?

The “troubled” teen went from appearing on Dr. Phil to get help with her stability and welfare, to supposedly recording an album, making public appearances, signing a reality show deal and now there is talk of her going on tour. Tour? What does a person who has no education and life skills do on tour?
byMelony Hill

Are You Participating in the Re-Victimization of Sexual Assault Victims Via Social Media?