Baltimore is a small place, no matter how big it seems. The internet has made it even smaller.…

Baltimore is a small place, no matter how big it seems. The internet has made it even smaller. There are people I am now aware of that before the internet became prevalent, would have never made it on my radar. One of them is local model/singer Tia Reid. I was a fan until I saw her berate and degrade a mom seeking help for coping with the fact that she walked in on her son being fondled by a family member. 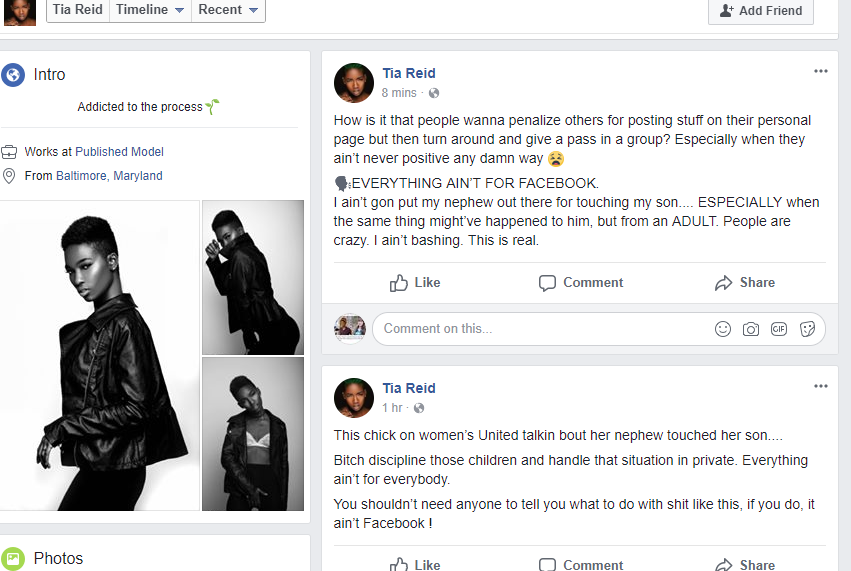 I discovered Tia sometime last year, though it appears she had been making a name for herself for a little longer. I first noticed her as a model, she posted some very visually appealing nudes and lingerie photos on her Instagram profile. I was happy to see that she was local and started to follow her,  interested in not only her journey, but her talent; not only was she a beautiful, natural Black female, she also has a beautiful voice.

I decided to keep an eye on her, I was very interested in watching her growth and eventually interviewing her for the sites. At one point, she even reached out to tell Me how the cover for The Strength of a Woman had caught her eye, I offered her a free copy of the book. I watched this young entrepreneur throughout her whole recent pregnancy, celebrating with her online as she gave birth and jumped right back into business.

Last week, I had a glimpse into the person behind the online image and it wasn’t pretty. I chalked it up to she was having a bad day. I was on Instagram and saw her engaging in taunting a woman who was furious that Tia had brought her young child into a beef with the child’s father. It was nasty and ugly, screenshots of personal messages and addresses being thrown out online. Tia ended the argument taunting the woman for giving her address out and proclaiming herself to care too much about her and her kids for such foolishness.

Last night, I realized it was not a bad day, but there is indeed a bad attitude behind the image. In fact, the image has been cleaned up. All the nonsense that was on her IG, including the taunting screenshots, are gone. The page looks as if there is a professional behind it, hopefully there now is. If she was to continue to let the nastiness seep out on social media, she wouldn’t make it far. 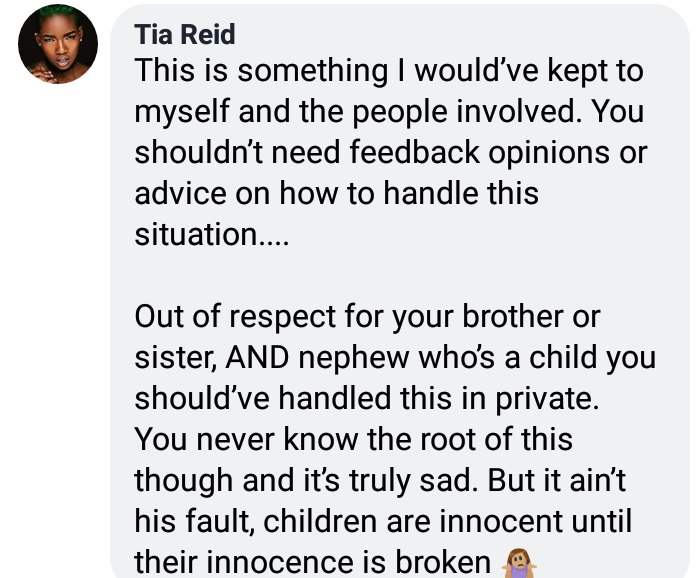 I unfollowed Tia on social media last night, disgusted as I watched her verbally bash, then attack a stranger online. The topic she chose to attack this woman on was so near and dear to Me and so serious, that as I write this I’m still baffled. The only thing I can come up with is hurt people hurt people, as Tia admitted last night, she had been touched as a kid as well, yet berated the mother for her hurt.

There’s a Facebook group for women, it’s not a private group, but a closed group, meaning that while anyone can join, there’s no share button because very personal things are posted there. The group houses 25,000 women, the majority residing in Baltimore. This group is like the show Girlfriends in real life. There’s a great mix of personalities, people can seek and receive help and support. I’ve seen a stranger leave her house after 11 p.m. to pick up a stranded stranger without charging her in this group. Women makes deals, sales, offer support, celebrate each other’s wins.

A woman came into the group late last night, frustrated and in need of assistance. She had caught her 5-year-old nephew touching her 3-year-old son inappropriately and was unable to stop thinking about it enough to sleep. She came into the group and expressed her feelings, seeking advice. First Tia bashed the woman for coming into the group to seek advice, telling this loving, hurt mother that she “shouldn’t need feedback, opinions or advice” and that it was something that should have been “kept to the people involved.” 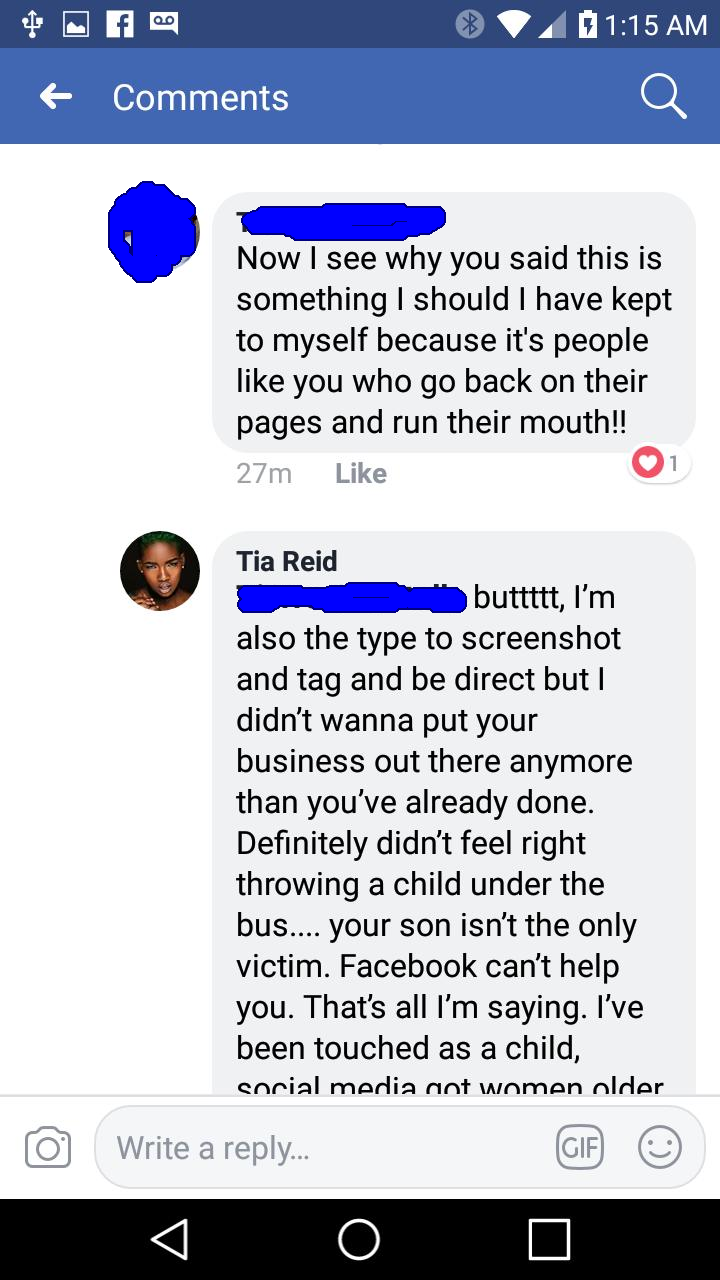 Ever the peacemaker, I saw the comment and immediately attempted to diffuse the situation. I made the next comment, telling the woman that if this was the place that she sought help, that’s fine.  I left and went about my business having no idea what was about to happen.

Tia then, went to her personal profile and reposted that woman’s information, making a status that not only referred to this upset mother as a “bitch” but insinuated that discipline is all that is needed when confronted with your child being touched sexually.

The mother reasonably, was upset and hurt, that someone would go outside of the group and talk negatively about her for asking for help. She confronted Tia for doing something so disgusting. Instead of admitting that she had overstepped her boundaries, Tia doubled down, degrading the woman even further.

Tia told the frustrated mom “I’ve been touched as a child, social media got women older than me forgetting how to handle real problems on their own.” I’m not sure what this woman’s age had to do with her telling us how she handled finding her nephew assaulting her child and asking our opinion. As the mother of two children, I wonder if the way she cavalierly says, “I’ve been touched” and basically tells the mom to deal and not seek support, is how she would address this situation if it happened in her home. 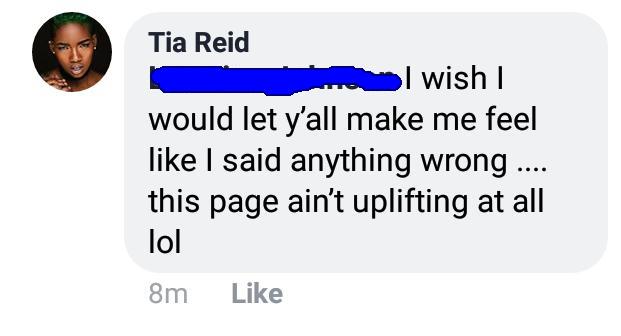 Tia further went on to call this mother a “snake to her sibling and nephew” for seeking advice on how to handle the fact that her son was molested. After watching Tia continue to degrade this mother who came seeking help, I let it be known that I was Baltimore media and following this situation. I told Tia how disgusting her behavior was and that I had been a fan of her work until this very moment.

After nearly an hour of women confronting her about her trifling acts and words, she went back to her personal page to play victim, posting that she was being “penalized for what she posts on her personal page but people can post what they want in a group”, ( it’s not a competition) and AGAIN brought up the child being molested on her status as if it’s a talking point. 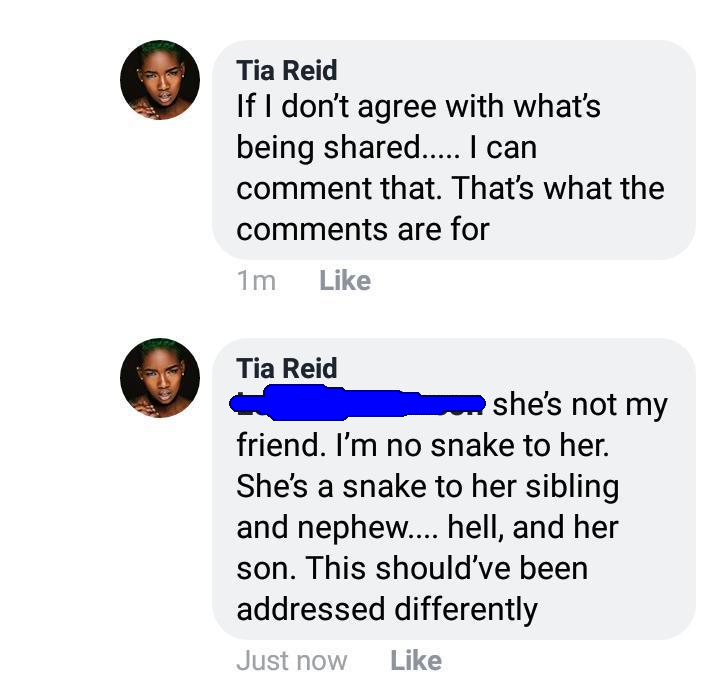 I have never been angrier watching a conversation go down in a group. I usually only participate to give advice on topics I’m knowledgeable about or to promote My local events that the ladies could appreciate.

I couldn’t sit silent. Seeing the way a local entertainer, a mother herself, degraded this frustrated mom over her son being fondled was disgusting. How could anyone say such things to a mother?

With all of this nonsense, can you believe she has a women’s empowerment event scheduled for next month? Who is she going to empower with this attitude ?If you’re as offended by this cyber bullying of a mother who only sought advice after her 3-year-old was molested, you can find Tia on IG  and Facebook 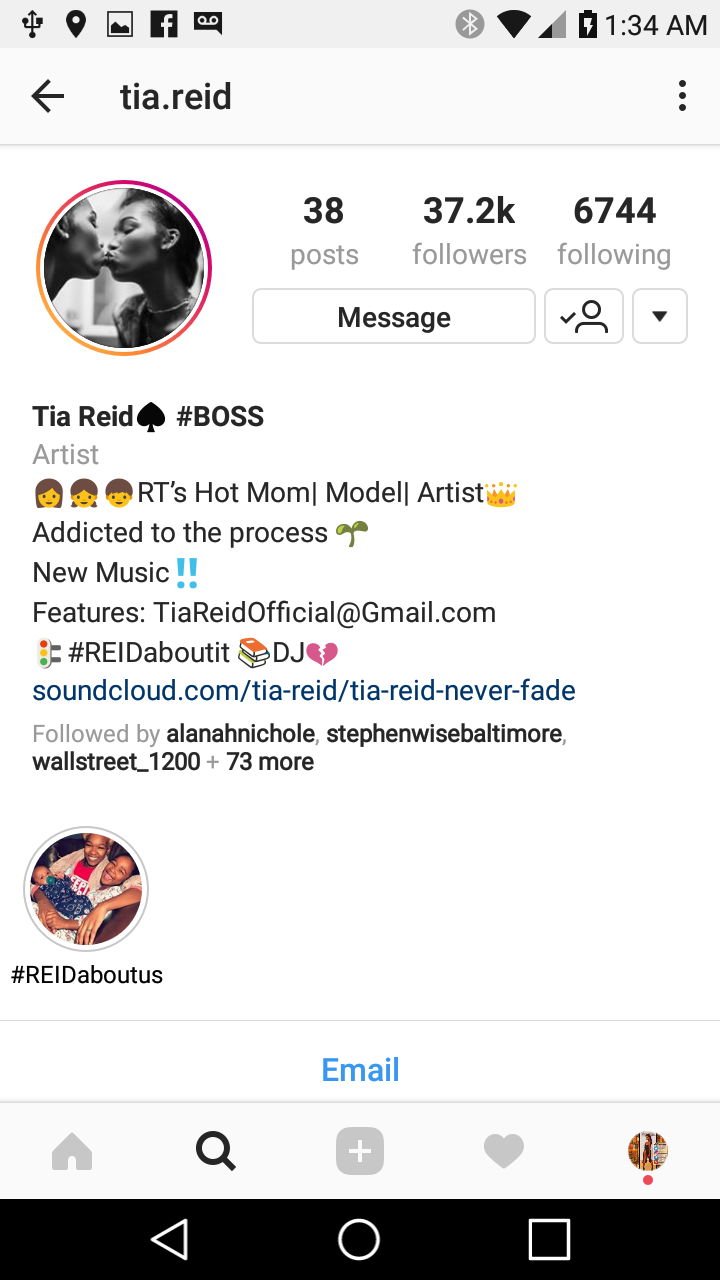 Unique Photography Ideas on How to Create a Documentary

The Beauty in Domestic Violence

"Yassss honey, your face is beat!" is currently a common phrase in the beauty industry. There are so many women that do not see that phrase as a compliment.
byShaquanda Cole

Reality television hits a new low with "Growing Up Hip Hop: Atlanta." What happened America? I know they say everyone loves to watch a train wreck but we used to at least try to protect our youth. I can’t and won’t watch this crap.
byMelony Hill