Border Patrol agents tell immigrant parents their kids are being taken so they can have a bath, but the children never return. For many parents, this may be the last time they ever see their children.

In McAllen, Texas, the Trump Administration’s war on immigrants has continued to rip parents away from their children. And, as the Boston Globe reports, there’s a new ugly Border Patrol tactic at play: Telling parents their children are going to be given a bath, only for their children to never return.

Many of these children are then shipped to foster families across the country. Their parents are often held in custody for months, and even if the foster families or lawyers try to track down the parents, Border Patrol agents frequently either refuse to provide information or offer only false or insubstantial information.

Not even congressional powers are enough to get accurate information at this point, nor are all of the children actually being cared for after they are separated from their parents. As Slate and others have reported, when Senator Jeff Merkley (D-OR) attempted to gain entrance to a Wal-Mart in Brownsville, Texas where refugee children were being detained by the Office of Refugee Resettlement (a story the Washington Post had the week previously broken), he was turned away by Homeland Security. When he persisted in trying to gain entrance to view the children’s living conditions, he was told he would be escorted away by police.

The cruel policy of separating parents from their children is intentional, and many in the Trump administration seem gleeful at the pain it causes families. Attorney General Jeff Sessions, for instance, does not sympathize for separated families, saying in a radio interview last week, “If people don’t want to be separated from their children, they should not bring them with them…We’ve got to get this message out.”

This bravado is inconsistent, however, At other times, Trump acts as if it is not his policy responsible, tweeting repeatedly that Democrats were to blame—never mind that his administration controls both houses and the executive. When it comes to immigration policy and this administration, the lies seem endless, the obfuscation relentless, and the policy implementations deliberately cruel.

And for many of these parents, even after they serve time for the federal offense of crossing the border illegally, they are often held in ICE custody for months at a time. When information is shared, it is often faulty.

As the Globe reports,

In late May, separated parents in McAllen were given a number to call HHS and try to locate their children. It was the wrong number. Last week, parents were given a handwritten note telling them to call ICE — not HHS — if they wanted information about how to reunite with their children. But parents did not have access to phones at the time, rendering the number useless.

Is separating children from their parents really what making America great looks like? Or holding children in an abandoned Wal-Mart? Or giving false information to lawyers trying to track down their clients?

Yet all of these things are now the norm with Border Patrol and ICE.

Author
Matt Stebbins
Matt Stebbins is, with his wife, the co-founder of Endless Trails, a Pacific Northwest 501(c)3 trail advocacy non-profit, as well as a freelance writer and editor. Learn more at www.mattstebbins.com
Previous Article

Why Set Up Your Own Gym?

As the intensity of the civil war does not seem to decrease, would it be time for the international community to consider military intervention in Syria?
byRenáta Janka Tóth 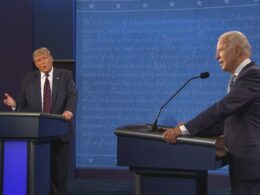 Creatures of No Conscience and No Value

The South Side of Chicago is infested with creatures so vile and repugnant none dare call them human.
byThe Listener

Countless Obama/Biden memes mocking Trump's presidency surfaced this week. In what has been a tense 10 days for many, these memes have brought great humor.
byMelony Hill