Gillum was hoping to become the state’s first black governor and first Democrat to hold the seat since 1994.

DeSantis is a former U.S. Representative who ran for U.S. Senate in 2016, but dropped out after Marco Rubio decided to seek re-election. DeSantis had previously been endorsed by President Donald Trump.
He fended off his opponent, Andrew Gillum, one of the strongest candidates Florida Democrats had fielded in years. Republicans have now won every election for governor since 1998.

Gillum conceded the race after running behind most of the night, and the Associated Press declared his opponent the winner. “We could not be prouder of the way we ran this race,” he told his supporters. “We recognize that we didn’t win this tonight.”

In an emotional address, in which he appeared close to tears, he apologized to those who had worked on his campaign. “I sincerely regret that I couldn’t bring it home for you,” he said. But he added: “Are we going to wake up and bask in sorrow and defeat? Or are we going to get up and reassert ourselves at the mission at hand?”

BREAKING: Andrew Gillum concedes Florida governor race: "I sincerely regret that I couldn't bring it home for you, but I can guarantee you this: I'm not going anywhere. We're going to fight." https://t.co/WpAEBymUsS pic.twitter.com/FjG1x2Q6tg

The crowd, which waited through much of the night in pouring rain, held up phones and filmed the speech, exchanging hugs and praying. A few supporters were in tears.

Gillum, who would have become Florida’s first African-American governor, came close to succeeding but ultimately could not overcome the state’s inexorable demographics: Older white voters who lean conservative vote at far higher rates than do millennial and minority voters, whom Mr. Gillum needed to turn out in big numbers to assemble a winning coalition.

Kids, Technology, and the Great Outdoors 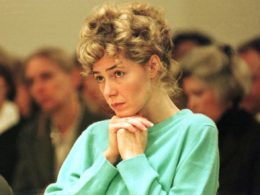 Letourneau was battling stage 4 colon cancer and was aided by her ex-husband in her final moments.
byBien Luigi

Texas City Residents Who Don’t Wear Masks In Public Will Be Issued $1,000 Fines

Drastic measures are taken by officials in Laredo, Texas to curb the spread of coronavirus. These measures include issuing $1,000 fines for residents caught in public without a mask.
byBien Luigi