The Los Angeles Lakers currently sit atop the Western Conference standings and were fairly dominant before the league suspension.

Once COVID-19 started to spread, Professional sports in the United States came to an abrupt halt. However, California Gov. Gavin Newsom said on May 18 that they could return to the state by the first week of June without fan attendance.

Since it’s been reported they’ve been holding private workouts at a secure location in their city, the Los Angeles Lakers could be prepared to play if that’s the case.

After being shut down due to COVID-19, Their practice facility opened back up on Saturday, May 16.  Social distancing guidelines prevent the squad from working out together there. So LeBron James has gathered some of his teammates in those private sessions, meeting with no more than two players at a time.

Stadium reports that everyone who attends those practices has been tested and maintains social distancing.

The Los Angeles Lakers currently sit atop the Western Conference standings and were fairly dominant before the league suspension.

The workouts are said to be a way for all the members to maintain chemistry, something they aren’t able to do at the Lakers’ practice facility.

Lakers shooting guard Danny Green was a guest on the latest episode of the “Load Management” sports podcast and said only two players can be in the facility at once, having to use separate baskets on either end of the gym.

He also confirmed Lakers players have taken steps to work out on their own, then went through the safety protocols they have to follow at the team facility.

“I got tested beforehand. Do the swab. Stick a q-tip in your d—n brain, scramble it around,” he said around the 25:44 mark. “Coming into the facility you have to wear your workout gear as you come in. So the shoes that you have on you have to take off at the door, they give you flip flops … they sanitize your hands, sanitize your phone, keys, etc.”

NBA play has been suspended since March 11 after Utah Jazz player Rudy Gobert tested positive for the novel coronavirus. The Athletic reports the league is considering holding all of its games at one location, with Disney World in Orlando, Florida, being the place atop the list. 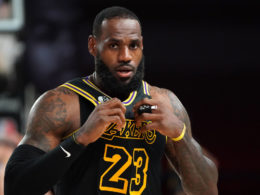 After the game, James wasn’t wanting to discourse about basketball, as he noted the Lakers were playing with a dreadful lot going through their minds.
byBien Luigi