Bringing back their “Black Mamba” uniforms, the Los Angeles Lakers pay tribute to Kobe Bryant on Game 4 of their first round series with the Portland Trail Blazers in honor of Bryant’s birthday on Sunday and it being 8/24.

Throughout the second half of this season since the awful death of Kobe, his daughter Gigi, and the nine others that were killed in the helicopter crash that rocked the sports world in January, the Lakers have offered various tributes to their legendary star.

The renamed section will run from MLK Jr Blvd, down by USC’s campus, to Olympic Blvd, just past L.A. Live, putting Staples Center officially at 1111 Kobe Bryant Blvd. It’s a great gesture by the city of L.A. and a fitting tribute to Bryant, given that he made Staples one of L.A.’s hottest destinations for almost two decades.

A statue to join those of Shaquille O’Neal and other Laker (and Kings) legends is surely on the way for outside of Staples, as well, and the center of the L.A. sports world residing on Kobe Bryant Boulevard seems just about right.

The incident has caused much more anguish for Vanessa, in fear that the images could still be online and in easy access of her young daughters.
byBien Luigi

Who You Got? Heat or Spurs

LeBron plots his revenge against Tim Duncan and the team that swept him in his first ever finals appearance when he was with the Cavs.
byEverick Davis Jr

Reggie Bush to Forfeit the Heisman Trophy, Vince Young May Now Receive it

Reggie Bush has decided to forfeit the Heisman instead of waiting for it to be taken from him.
byBrennen Jones 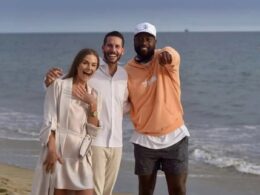 On one hand, this is simply a glorious coincidence, as Wade clearly seemed surprised and touched by what he was witnessing.
byBien Luigi