It should also be noted that the video is a good look for the estate MJ as it could possibly boost it closer to the $25 million price it was listed under back in 2012.

This added to the long list of highlight moments in 2020 for the Houston star and the song arrived with a quirky video shot at Michael Jordan’s famous Illinois mansion.

Copying a scene from the basketball legend’s The Last Dance documentary which finds him driving out of the gates of his mansion, the video swiftly transitions to Travis and a few friends in luxurious cars driving through the gates and around the manor. Scott then goes on to get some pushups in at the mansion’s basketball court and relish a few rounds of golf outside.

While one may envision the mansion as not the easiest location to secure for a music video, Travis had no issue getting approval from Jordan to shoot the video.

When Travis decided that the Chicago Bulls legend’s mansion would be ideal location for his music video, he contacted him and reportedly got the green light “without hesitation.” With that being said, it shouldn’t be a surprise that Travis got the approval from MJ with ease as the Houston rapper previously released several colorways of the Air Jordan 1, 4 and 6 sneakers.

It should also be noted that the video is a good look for the estate MJ as it could possibly boost it closer to the $25 million price it was listed under back in 2012. The mansion is currently listed at $14.8 million.

Ten years ago, Mariah claimed not to know who Jennifer Lopez was...and according to her, she still doesn't.
byTriston

“Red,” the anguished two-man drama about painter Mark Rothko and the timeless tug of war between art and…
byAssociated Press

Portland Rappers Put On For Their City in Dope Cypher

Hip-hop has a number of movements in different cities. Future and Outkast are two of Atlanta’s biggest acts,…
byVictoria Johnson 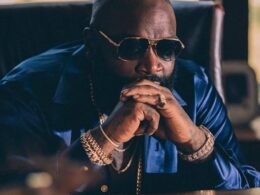 While it’s unknown which the day the video was recorded, fans can rest assured knowing that it’ll be due sooner rather than later.
byBien Luigi