Amber proceeded to say that she did go into the store searching for the man. However, she was not able to find him.

It looks like Trump supporters are showing out as as Election Day gets closer.

A Trump supporter was encountered recently by singer/ actress Amber Riley who she says spat on her car.

She took to Instagram on Sunday to detail the incident and said that the Trump supporter spat on her car when she pulled into a parking garage as she was preparing to head inside of a store.

She is definitely not the one to play with as she expressed her frustrations to her followers. She said, “I’m not the one, the two or the three. I’m not the person that’s going to take their phone out and make you famous when you’re doing racist sh*t. Imma beat yo a**. I don’t condone violence, but I do condone self-defense.”

Amber proceeded to say that she did go into the store searching for the man. However, she was not able to find him.

Actress and fellow friend of hers, Francia Raisa, experienced the same incident on the same day with a group of Trump supporters, according to Amber. Francia took to social media to emotionally speak about being stuck in the middle of a Trump rally, where she claims she was boxed in as she was harassed, causing her to possibly crash her car.

While expressing her anger and disappointment, Amber proceeded to say that she doesn’t care which candidate people support, she just cares about how Trump supporters are trying to make people feel and the attacks that people have experienced. 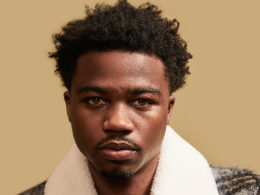 It would certainly be great timing for the 21-year-old upstart, who began the year by winning his first-ever Grammy Award alongside Nipsey Hussle for their collaboration “Racks In The Middle.”
byBien Luigi

Retired actor Joaquin Phoenix is said to be pursuing a career in music, specifically hip-hop, and has enlisted mogul Diddy to produce it.
byBrennen Jones

From The Red Carpet Premiere of “Just Wright”

On the night of Tuesday,May 4th  stars showed up at the legendary Ziegfeld Theater for the premiere of…
byKadeem Lundy
Read More