Bush II has largely remained silent during the lead-up to Election Day, not endorsing Trump but also not coming out against him.

Four days after the election, America finally had a response for who would be their next president. Without a surprise, it wasn’t incumbent Donald J. Trump.

The Biden win was a huge reprieve for many, and the revelries that broke out in cities across the nation were unbelievable.

Of course, not everyone was pleased, not the least of them Trump himself. He spent the last week filling his Twitter feed with baseless conspiracy theories and other assorted misinformation. Other Republicans, among them Newt Gingrich, have joined in claiming — again with proof — that the election was “stolen” by Democrats. \

One noted Republican who’s not doing any of that stuff? George W. Bush.

The 43rd president reached out to Biden by phone on Sunday, not only congratulating him on his clear win but also making sure he knew he wasn’t believing any of that jazz about the election being illegitimate. “The American people can have confidence that this election was fundamentally fair, its integrity will be upheld, and its outcome is clear,” Bush said in a post-call statement.
He added:

“Though we have political differences, I know Joe Biden to be a good man, who has won his opportunity to lead and unify our country … The President-elect reiterated that while he ran as a Democrat, he will govern for all Americans. I offered him the same thing I offered Presidents Trump and Obama: my prayers for his success, and my pledge to help in any way I can.”

Bush II has largely remained silent during the lead-up to Election Day, not endorsing Trump but also not coming out against him, as a number of Republicans did. Congratulating Biden can be read as an attempt to bring peace and civility to a nation bitterly divided against each other.

Then again, don’t forget that who George W. Bush is. He’s the president responsible for one of the most disastrous and illegitimate wars in American history. And he was the winner in the notorious 2000 presidential election, which led to an aborted recount in Florida that put the man who lost the popular vote in office — much like following Republican president.

That said, at least Trump won’t get to do the same thing twice.

Obama ’08… Could It Really Happen?

If you have watched any politcal news program or read about politics in the past recent months, then…
byBrennen Jones

How Can The Racial Division Be Mended?

Racial tensions are rising due to recent developments involving the Michael Brown and Eric Garner cases, but many Americans united to show that there's still hope that these race relations can be mended.
byTroy Patterson 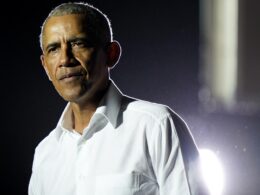 During the interview, Obama explained that once his position was over and he left office, Michelle was able to relax and release a breath.
byBien Luigi

After months on the campaign trail, Hillary Clinton released a copy of her 2015 tax return to the public Friday.
byMegann Horstead