If there’s a serial killer living next door to you, would you tell the cops? Cam’ron wouldn’t.

On CBS’ upcoming 60 Minutes program, reporter Anderson Cooper takes a look into how hip-hop’s “anti-snitch” messages, have undermined police efforts to solve murders across the country.  So who do they get to speak for hip-hop on this matter?  You guessed it, Killa Cam.  Once again, this is not a good look for Black folks or hip-hop.  If you recall, Cam’Ron and Dipset had that “Stop Snitchin'” campaign a while back.  They were making hella dough off of selling those t-shirts.

In the 60 Minutes clip below, Cam’ron vehemently states that he would never help the police solve a crime.  In fact, Cam’ron wouldn’t even help the police find the person that shot him, while he was in his Lamborghini, during Howard’s 2005 homecoming here in DC.  Cam’ron believes that snitching would violate his “Code of Ethics” and hurt his music sales.

I think I’m going to have to disagree with Cam on this one.  According to my personal Code of Ethics, saving the lives of others, ranks a just little bit higher that “snitching” on my priority list.

It looks like Michael Jackson's hit song "Billie Jean" may actually have some truth behind it.
byTUT Staff 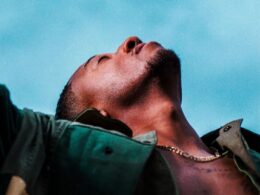 Lecrae Devaughn Moore, once a thrill-seeking troublemaker known as “Crazy ‘Crae” in his adolescent years, where drug dealing…
byDomingorich

Give this man his chance and he'll tear the door off its hinges.
byH. Sylver

Is this a case of disrespect or a simple misunderstanding between NASA and Queen Bey?
byBrennen Jones