As as Steelers fan, I hate these type of distractions for my team, but unfortunately I got to…

As as Steelers fan, I hate these type of distractions for my team, but unfortunately I got to report them to be fair.

Big Ben, the quarterback for the defending Superbowl Champions, is connected to yet another lawsuit.  But the good news for him is that he is not named a defendant in this particular case.

A former restaurant worker claims he was fired because he had demanded to see identification for a young-looking woman at Ben Roethlisberger’s table where the NFL quarterback and his friends were drinking.

Alvaro Brito, a former assistant manager at the Cabo Wabo Cantina at Harrah’s Lake Tahoe who had worked for the company for 12 years, said he was fired in July 2008 in a lawsuit filed against the hotel-casino and its Lake Tahoe president John Koster.

The new lawsuit, filed Sept. 25 in Washoe County District Court in Reno and first reported by the Reno Gazette-Journal, does not name Roethlisberger as a defendant. But it potentially has a connection to a separate lawsuit filed by another former Harrah’s employee against the Pittsburgh Steelers quarterback, Koster and a number of Harrah’s officials alleging that Roethlisberger raped her at the hotel in July 2008 and that the company covered it up.

In that other suit, Big Ben has been accused of rape.  An allegation which he denies.  But with the connection of this case to that one being the reason why the rape “victim” waited so long to report it was because of this employee’s firing, it just kind of adds a little bit more credibility to her case.

Floyd tops the list of highest paid athletes in 2015. A list which also includes the man he just recently beat, Manny Pacquiao, coming in at number 2.
byTUT Staff 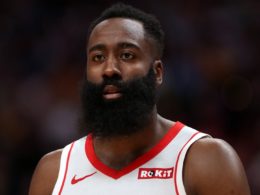 Harden had always planned to join their teammates prior to the restart of the NBA season.
byBien Luigi