Just when everything was looking up for the King of the South; starring in the #1 movie in…

Just when everything was looking up for the King of the South; starring in the #1 movie in the country, “Takers”, while simultaneously having a Top 10 hit featuring Keri Hilson, “Got Your Back”, becoming a married man to is long-time girlfriend and mother of his children Tameka “Tiny” Cottle, and not to long ago was released early from his year and a day stint in prison. But it all came to a crashing halt last night in Los Angeles.

Clifford “T.I.” Harris, 29, and his wife, 36, were pulled over in their Maybach during a routine traffic stop on Sunset Boulevard. Authorities reportedly smelled a strong odor of marijuana coming from the vehicle, and charge the rapper and Cottle with possession of a control substance and booked at a West Hollywood Sheriff’s Station. Bail has been set at $10,000.

As many know, for federal weapons charges, T.I. has just finished serving seven months at a Arkansas facility and three months in a halfway house in his home state of Georgia.

Many question what can possibly happen being that he is very much still on parole, and this is clearly a violation. We will keep you posted on the developments as they come to us, for now, this has been a “Breaking Twist”.

Tale of a Fantasy Football Newbie 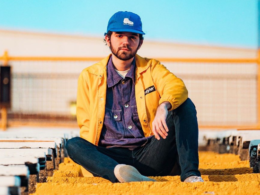 J. Cole’s Dreamville Compilation Album ‘Revenge Of The Dreamers III’ Debuts At No. 1

After 34 artists and 27 producers recorded in Atlanta over a 10-day span earlier this year for J. Cole‘s Dreamville Records’ latest compilation effort, ‘Revenge of the Dreamers III (ROTD3),’ it’s now debuted at number one on the Billboard 200 albums chart.
byTUT Staff

Bieber Granted Access To U.S. After Drug-Sniffing Canines Find No Contraband On Jet

Justin Bieber's private jet touched down outside NYC for the Super Bowl and authorities immediately held him for questioning.
byTUT Staff

Watch out Pitbull. Vein, a Puerto Rican-Russian hitmaker, is on the rise with his latest single "I Feel It" featuring Alejandro Brooks.
byVictoria Johnson