Liberals It’s Your Constitution Too, Now Own It!

You know, until very recently, I had resolved that conservative owned, not only freedom and liberty, but the…

You know, until very recently, I had resolved that conservative owned, not only freedom and liberty, but the very Constitution that has enshrined our essential right to them in this country. I had also come to accept the fact that I, as a liberal-progressive was less entitled to invoke the names of our country’s founding fathers, kind of like the equivalent of Muslim invoking the name of Jesus, or a Jew doing the same of Buddha…

Was it Glenn Beck’s daily teargasm where he claims to be the authority on the founding fathers (if not Jefferson incarnate)? I mean, after all “I just love my country, and I fear for it” too. Maybe I was simply a victim of a propaganda strategy against liberalism, but for whatever reason I, as person with a BA in Political Science and a MA in communications, had somehow put it in my mind that the constitution was some complex piece of ancient Kabbalah literature to be interpreted only by orthodox Americans – i.e. conservatives. Thankfully, my desire to be informed when debated my friends on the right led me to actually read the US Constitution and trust me, it ain’t rocket science. In fact, you can view it here. And you can also find selected writing by the founding fathers here too.

Why is this important? Well simply put, knowledge is power in the arena of ideas. The country is founded on ideas, and laws are created based on these ideas about how to address any myriad of issues, from the most mundane to the most complex. It seems that for far too long, many on the left have come under the false assumption that all of the Founders were a monolith of conservative thinkers and that their writings and the Constitution support that belief. The consequence of that thinking has led us (liberals) to believe that WE take up causes based purely on emotion as opposed to doing so with a sense of constitutional logic and a sense of the history of the founding of this great nation. Hence the term “bleeding heart liberal”….

But the truth of the matter is that the Founders argued back and forth in exactly the same way we do today. Their ideas were both liberal and conservative and they were both given to logic and emotion. They were men, not saints and their ideas were subject to interpretation, not inscribed by The Almighty as ‘Thou shall… Thou shall nots’ They belong to liberals and conservatives alike, yet conservatives have become their sole proprietors of and thus, too often and in growing numbers are there those who will readily and ardently insert the words “Constitution” and “founding fathers” into their political rantings with such a lack of understanding of that which they hold so sacred.

I listen and can’t help but wonder how many of them are speaking as those who have actually read the works for themselves as opposed to how many are basing their rhetoric on the rhetoric of 4 hours of Sean Hannity. I’m pretty sure we all know the answer to that, btw. The problem with this is that they ‘trust but won’t validate’ what they’re favorite right-wind spinster puts forth, and they, in turn come to the conclusion that the Supreme Court is acting as judicial activist when they don’t interpret the Constitution based on their ‘less than enlightened’ view of Hannity’s, Limbaugh’s or Beck’s interpretation of the Constitution.

To turn a Regan a famous colloquialism around ” the problem with our conservative friends isn’t that they are ignorant, but that they know so much that isn’t so”. I’m not casting stones, for we are guilty of the same.

This is, in no way to denigrate my conservative friends, with whom I debate often and fondly about policy and who freely and readily look to the constitution as a resource on issues. They display a grit and backbone that seems inherent in those who are assured that they have “the law on their side”. That said, this is aimed at empowering progressives to be aware that you too have the law on your side, and you too have the writings/thoughts of the founding fathers on your side. Progressives; liberals; you aren’t the bastard children of liberty and freedom. You are realization of liberty and freedom – every much as any conservative. Will the law always support your “bleeding heart policy assertions”? NO… But you might be surprised at just how often it does.

Willow Smith Wanted to Be Like Her Parents, Wasn't Forced Into Show Biz

Jessica Hampton: Murdered And Abandoned By The City That She Loved

Jessica Hampton lost her life because people didn't care. They will have to live with this for the rest of their lives.
byNegra With Tumbao 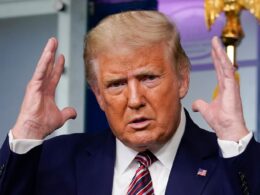 Some pointed out that Joe and Jill Biden paid quite a lot more than that, despite allegedly not being as wealthy as the Trumps.
byBien Luigi

The republican candidate proposed the idea to eliminate FDA safety rules on his website, then deleted the statement without any explanation.
byDalindcy Koolhoven