Best And Worst Dressed At The AMA’s

What would be of a self-aggrandizing music awards show without a self-aggrandizing red carpet? Just the thought of an absent colored-velvet-y carpet for the pop elite to strut their stuff and be snapped by hordes of photogs is almost an inconceivable notion. This is the time when designers get merited for their creations, or get (along with the celebrity wearing it) slashed and burned.

On November 21, 2010, the 38th Annual American Music Awards took place at the Nokia Theater in Los Angeles. The burgundy carpet was witness of fashion hits and catastrophes galore. Below, I discern, in no particular oder, the selected few who hit the right note and those who made me want to turn my television off.

The Black Eyed Peas leading lady, Fergie, stepped into the red carpet in a heavy beaded blue and black concoction festooned with feathers by Falguni and Shane Peacock and spiked heels by Ruthie Davis. The shoulder pads could have been over the top, but she managed to looked sexy and not vulgar. The bag was unnecessary.

It’s not a secret that Rihanna loves fashion, though at times it seems that she got dressed in the dark. This time she donned a sensual Elie Saab Couture lace gown with long sleeves, vaguely reminiscent of Riccardo Tisci’s Fall 2010 Couture collection for Givenchy. The beautiful crafted one-of-a-kind gown is a head-turner and bank-sweeping (celebs usually borrow couture) creation by Mr. Saab, but I would have prefer to see it in a different scenario on a lady with a different hair color. The color similarity of the carpet, gown and hair usually results in disaster, but these days Rihanna seems to get away with anything she wears.

Keri Hilson stepped into the carpet in a simple black mini dress with delicate draping stemming from the waistline, giving an appealing illusion. The necklace and bracelet were conflicting. Sometimes, less is more.

Miley Cyrus is in a transitional phase, and I’m not talking about gender-switching matters, I’m referring to her career as an artist. Some still view her as a Disney star, but in reality, she’s growing up fast (perhaps a bit too quickly) delving into provocative music and with a more age-appropite style, she’s proving folks that she’s becoming a young lady. In the past, Miley has been spotted wearing too revealing clothes, but this time she showed up in a beautiful soft pink bandage dress with a train by Marchesa. A sexy, yet sweet enough dress that says “classy” more than “trashy”.

The Ali actress (and one of my favorite women in Hollywood) Jada Pinkett Smith came out in a custom made gown by Peter Dundas for his Pucci 2011 Spring/Summer collection (Jada was spotted sitting front row at his fashion show in Milan last September, I saw it live). I’m glad Jada (or her stylist) picked  a gown that showed off her features. I mean; Can we talk about that body? I love the severity of the rusty metal top juxtaposed with the sensibility of the tiered organza dress. And I’m also intrigued at the appealing illusion the gown makes as the wind blows. The allure of the gown matches her stunning physique, now the clutch, not so much.

Taylor Swift, America’s sweetheart and country pop star showed up in a gorgeous rhinestone-laden mini by Australian-based designer Colette Dinnigan. She’s one of those celebs that consistently looks great wherever she goes, say it was a party, Hollywood event, or any red-carpet, she delivers. The somewhat surprising factor was the straightened hair, which reminds me of a popular commercial; easy, breezy, beautiful (you know the rest).

Trey Songz can’t do no wrong in my book, all he has to do is take his shirt off. The suit fits him properly, not tight, but fitted. A word that has become synonymous with homosexuality in America. But I’m glad Trey is showing a few guys how to properly rock a one piece suit. And check out the shoes, looks like it needs to be in my closet. And yes, I do agree, he looks better without clothes.

I always count on the Black Eyed Peas to bring a sense of originality to the table. As artists, they tend to further express their music to their style, and I commend them for always taking risks, never  a dull moment. With the release of their new album “The Beginning”, the monochromic scheme seems to sets an undertone to a new direction the quadruplet is seemingly taking. Just Will.i.am’s fitted cap made out of legos and his mini-me lego medallion is fodder for fashion enthusiasts like me. Whether you like them musically or not, you can’t deny their aplomb for attempting to explore sartorially-inhibited territory.

John Legend and Christine Telgen simply look radiant together. This might sound cliche, but it looks like a match made in heaven (just look at their faces). It could’ve been a great shot if John wasn’t stepping in her gown.

When an album is about to be release, an artist would do anything in her/his power to garner as much attention to her/his profile as much as possible, and this has nothing to do with fashion. I know their album sells are important, which in part is the livelihood for their careers. I love Nicki Minaj’s work, I believe she’s truly talented, but why put your sense of style and public persona in jeopardy? Here, she’s wearing a Manish Arora creation and Christian Louboutin heels, which are hot, but a pair of hot shoes is not going to salvage the already-made damage. The idea of wearing a ribcage and assorted body parts as a decoration for a simple dress is banal, and border line custome-y. But then adding a Egyptian asymmetrical hairdo with dyed lollipop green ends just makes her look more into character, which at the end of the day, is probably what she’s aiming for.

While she was walking the carpet, she briefly stopped to do an interview with Lance Bass and Whitney Port, there Ke$ha revealed that her “thing” was made of VHS tape. Yes, VHS tape. Most recently, she flagrantly showed up at the MTV Music Video Awards wearing a “thing” made out of trash bags. I see her attempt to push established notions of the “norm”, but playing designer, which is a slap in the face to so many visionaries, is not her thing. What I would recommend is to leave the trash bags, VHS tapes, and other nonconventional materials taken as fabric and thread, and hire a stylist. Maybe, Vivienne Westwood might work, just maybe.

Willow Smith is a music phenomenon, by now her hit single, “I Whip My Hair” is probably being played in India and North Korea. And she’s a sweet girl, I might add. Willow has a sense of style that is not common on many girls of her age, perhaps that sense of artistry was genetically passed down from her very talented parents. I don’t know if you heard of the scandalous news that her arm/shoulder bright yellow buckled piece was plagiarized from a notable designer from London. Her name is Mildred Von Hildegar, the head behind the label Mother of London. Willow’s stylist, who shall remain nameless for her colossal fashion mistake, was clearly oblivious what she pirated was a signature design from Mildred. Not only did she bespattered her name in the industry, but she linked Willow’s name to something that the fashion industry utterly rejects. Thankfully the issue was resolved and the designer was credited for her design. Now the stylist knows the reason why she won’t get hired anywhere, if she isn’t already. Keep her in your prayers.

Christina Millian is a sexy young lady, blessed with a gorgeous face and physique, but looking at what she wore to the event, which was a lace and sequenced concoction by Jerell Scott, only leaves me wondering. Why would you wear such atrociousness to any public place? It unfortunately says a lot about her taste level (or her stylist). Looking sexy (which is not her dilemma) instead of slutty for so many girls of my generation is like a chemical equation, if you put slightly too much of an ingredient, it can alter the end result, this time, the solution was over saturated. It’s not rocket science.

Excuse me if I left your favorite artist out of the picture, I can only add the ones that performed below, or above average. I understand being a celebrity is a world of complexities. It can make you or it can kill you (some people don’t know what to do with fame). This status puts them in a platform to have a voice and be heard. It also brings a lot of perks, one of them is having the access to any designer in the world, even if a few have no interest in fashion. So looking drecktitude is not an option. Tell me, was I being too harsh? Too passe? Who were your best and worst dressed?

Author
Jimmy De La Cruz
A 20 year old fashion editor/stylist with an effervescent passion for fashion on his way to Vogue. You can reach me at jimmydelastyle@gmail.com, follow me on twitter @jimmydelastyle and don't forget to check me out at http://www.delastyle.blogspot.com
Previous Article 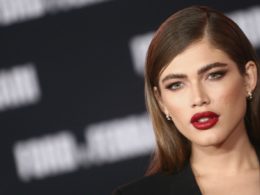 She was also the first openly transgendered model to be on the cover of a ‘Vogue’ magazine, covering the French edition.
byBien Luigi

Anifa used the show not only to show off her designs, but to raise awareness about issues facing Congo with a short documentary at the start of the show.
byBien Luigi

DIY Easter Costumes For The Kids

It's nearly Easter, and your children are probably dying to eat their weight in chocolate while dressing up as the Easter bunny.
byTUT Staff

8 Must-Have Accessories for The New Season

Winter may be well and truly gracing us with its presence.
byTUT Staff