Alvin Greene, the unemployed Army veteran who suggested during his failed U.S. Senate bid that making action figures of himself would help create jobs, is running for office again.

Greene paid the $165 filing fee on Christmas Eve to run in a special election for a South Carolina House seat made vacant by the death this month of Rep. Cathy Harvin.

Cal Land, the chairman of the Clarendon County Democratic Party, said Greene entered the race five minutes after the filing period opened. A primary will be held Feb. 15 with the special election set for April 5.

Greene said Monday he would wait to see who else filed before commenting on the race. He was handily defeated in November by incumbent U.S. Sen. Jim DeMint.

Are We Saying ‘No’ to American Values?

The student government at the University of California, Irvine has voted to ban the displaying of the American flag.
byTroy Patterson

Rep. Maxine Waters’ Sister is Dying Of The Coronavirus

Maxine Waters revealed that her sister is dying from coronavirus.
byBien Luigi

The crucial swing states in the 2020 US presidential election

It’s less than a year until the next US presidential election.
byTUT Staff 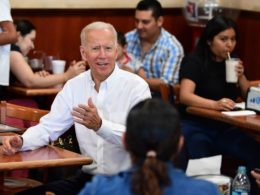