McDonald’s has been the world’s largest retailer for nearly 40 years, ever since the 70’s, but now it…

McDonald’s has been the world’s largest retailer for nearly 40 years, ever since the 70’s, but now it has to move aside and let a new king reign supreme.  Subway claimed more worldwide stores than fast-food king McDonald’s for the first time.

Subway, which was founded in 1965, attributed some of its success to its private ownership. “That is our choice, and the reason for that is that it enables us to focus on the product, the quality, the restaurants and not on the other things associated with a public company, like financial statements,” said Winograd. McDonald’s was founded in 1955 and is a publicly traded company with a value of around $80 billion.

I’m also sure that Subway being able to fit a shop into some spaces where it’s a place a shop into some areas that are the size of public restrooms, but success is success.  Who am I to hate?

Also, who can top their jingle?  Maybe McDonald’s need to invest and bring in Quincy Jones and create a jingle all their own.

Short Film Aims to Show That's it's Not What You Know About AIDS, but Rather "Who You Know" 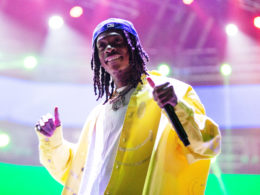 I swear to you I am seriously thinking about naming my first born ‘Carbohydrates’.
byChristina Jeter

McDonald's restaurants in China plan to unveil a "Black and White" burger combo that many are taking as an homage to the Yin and the Yang signs.
byBrennen Jones

A tale of two trend foods

Being a "foodie" is way more hip than it used to be, and food trends spread as quickly as a viral YouTube video. Here's a look at two odd dishes vying for the Internet's favorite delectable delight.
byHaley BeMiller