Donald Trump has been in the news a lot lately it hasn’t been because of his show, Celebrity…

Donald Trump has been in the news a lot lately it hasn’t been because of his show, Celebrity Aprrentice, but rather due to the fact that he’s been questioning our President’s birthplace  as so many crzaies have done in the past.  Even though there is a surplus of evidence that proves that the President is and has always been American, these ‘Birthers’ just won’t let it go.

The president’s sister, Maya Soetoro-Ng, says that it’s time for all of this foolishness to stop and I agree.

“He was born in Hawaii. There is a tremendous amount of proof that has already been presented,” she says in an interview to be broadcast this evening on CNN’s Piers Morgan Tonight. “I think that it is time for people to put that to bed.”

Earlier this week, MSNBC reported that “the Hawaiian state health official who personally reviewed Barack Obama’s original birth certificate has affirmed again that the document is ‘real’ and denounced ‘conspiracy theorists’ in the so-called ‘birther’ movement for continuing to spread bogus claims about the issue.”

What really irks me about this whole “Birther” thing is that with any job that you apply for, that there’s a background check.  Even if you applied for a job to be a janitor, there would be a background check.   So these people want us to believe that a Republican government (at least at the time of election) would even allow a candidate who’s a Democrat and obviously their opponent to become President without having his credentials or background checked?  Not to mention that he’s Black.  Get the heck out of here!

Rosalind Rice: "Beautiful" is as Beautiful Does

Ethiopia's lawmakers are set to pass a bill that puts homosexuality on a list of offenses considered "non-pardonable".
byPascal Mnyika 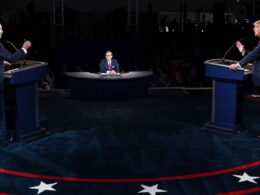 Biden also slammed Trump’s financial policies during the coronavirus crisis. “You can’t fix the economy until you fix the COVID crisis,” he said.
byBien Luigi