Rapper turned actor Shad ‘Bow Wow’ Moss recently spoke with us about his role in Tyler Perry’s latest film ‘Madea’s Big Happy Family’, his next films and his long awaited next album.

1. How did you actually get the part?

Yeah I got the part by my agent calling me when I was in L.A. He was like “Yo I need you to go downstairs and do a table reading for Tyler’s new movie.” I was like alright cool. I thought he was like [playing], and I was like is Tyler going to be there. And he was like “yeah”. Then when I saw him come through, I was like wow he really was there. It was just so surreal. Then after that they basically kind of knew I had the role before I came downstairs. I believe they made the right choice. I hope I make them proud with this one.

2. After first reading the script what first stood out to you?

Ah man it was just the story. It was definitely the story. Then of course you know I would be lying to you if I didn’t say it wasn’t my character because it‘s the character that I have to play, so of course I got to like him too. It was really the story and what it meant. Just bringing everybody together, the message of you never know when somebody is leaving. So you got to make sure to tell the person you love them. Tell your loved ones you love them because like I said you never know when it’s that person’s time. I’ve dealt with a situation like that before. My grandma she passed away from cancer and he doesn’t flip. Ms. Loretta goes through what my grandmother goes through in this movie. So it struck home. [And] being that Tyler Perry was behind it, that’s like a no-brainer, and I’ve been wanting to work with Tyler for a longtime. He knows that, and the time was right. We made it happen.

3. In which ways is your character Byron similar to you?

He’s similar because he’s a stand-up dude. He stands up. He could have easily been like okay cool. He stood up, he got rid of both of them women. Look if you don’t like it then bounce. This is what it is. This is the right track I’m on. I’m trying to be the best man I can be not only for me but my son. If your not feeling it then step. He stood up for what he believed it, and that is what kept him going.

4.What were some of the funniest moments that you can remember that happened onset while filming?

No funny moments actually man. It was all work no play. Tyler gives us a little flexibility to play around. But for the most part it’s serious. I think a lot see the comedy side of it, but it’s some drama, some heavy drama that goes on in this movie. It really wasn’t that much playing around really, everyone was really serious and on point.

5. Now in the film there are some really emotional scenes. How were you able to pull that off?

Just being a actor and just tapping into a whole other side of myself, that only the craft of acting can bring out of you. I credit all that to my cast mates and Tyler and everybody else because they bring it out of you. That’s just what working with great actors and actresses and just knowing your role and knowing your position. That’s basically how I got a chance to deliver onscreen that way. I didn’t think about anything, I became Byron, I understood the movie, the story, the character. Once you do that man it’s over from that point.

6. Are there any other current films that your working on?

I just wrapped another movie last month called Recalled. It’s a army movie, and I’m actually getting ready to start another movie next month called The Lowenfish Party which will be a comedy. So you guys can expect me back on some of the normal Bow Wow material that you guys usually see me on the big screen. So I’m back at it, I ain’t taking no breaks.

7. So we hear that you have a album that you are working on, to be called ‘Underrated’. When can we expect this album to be released?

Underrated, if not this year, then definitely next year. I’m just so jam packed with so much stuff. Me and [Ice] Cube just linked up for my tv sitcom. We just closed that deal last week, that made press like crazy. So I’m just gearing up making the right moves,and making the right opportunities. Trying to make sure I have time to do all this stuff. I’m in the middle of working on the album, I’ve already started getting records together. But as of right now it’s so hard, but I’m just trying to handle things one thing at a time.

The summer sounds train continues with Chicago’s own Julian Xtra as he rides a melodic wave with his…
byAshly E. Smith

Between SZA, Solange and Childish Gambino, this seem to be the time for quirky, sensual and funky black music…
byVictoria Johnson

Will Adam McKay Write Ant-Man and The Wasp?

In a recent interview Adam McKay has hinted that he would be open to writing the Ant-Man sequel.
byStu Greenfield 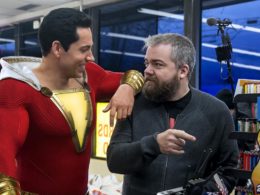 Director Made ‘Shazam!’ Joke Trailer For The Sequel And Used ‘Reviews’ Of The Not-Yet-Made Film

The video lasts about 30 seconds, and it follows the tradition of draping pull-quotes over the screen in dramatic fashion — a practice critic-proof comic book movies rarely employ.
byBien Luigi