It’s official. Joe Paterno is fired and will not coach final games of the season.

This is an official update of the Penn State sex scandal that has rocked collegiate sports as of late.

Just earlier today, it was announced that Joe Paterno will coach until season’s end. Now that is not the case as Penn State officially pulls the trigger on something that maybe should have happened a week ago. They decided to fire Joe Paterno, Penn State’s head coach of the past 46 years. Penn State’s president Graham Spanier was also served his walking papers by the university.

They’re both out at Penn State in the wake of a disturbing child sex abuse scandal involving former assistant coach Jerry Sandusky.

Paterno has been besieged by criticism since Jerry Sandusky, his former defensive coordinator, was charged over the weekend with 40 criminal counts of molesting eight young boys between 1994 and 2009 through his charitable foundation for at-risk youths, The Second Mile. Sandusky is free on bail and has a Dec. 7 court hearing.

Athletic director Tim Curley and vice president Gary Schultz were charged Monday with failing to notify authorities after an eyewitness reported a 2002 assault. The two will seek to have the charges dismissed, their lawyers said. Curley requested to be placed on administrative leave so he could devote time to his defense, and Schultz will be going back into retirement, the school announced.

The U.S. Department of Education said Wednesday it would investigate whether Penn State violated federal law requiring the disclosure of criminal offenses on campus and warnings of crimes posing a threat to the community in its handling of the allegations. U.S. Rep. Patrick Meehan, R-Pa., requested the Education Department’s involvement on Tuesday.

“If these allegations of sexual abuse are true then this is a horrible tragedy for those young boys. If it turns out that some people at the school knew of the abuse and did nothing or covered it up, that makes it even worse,” U.S. Education Secretary Arne Duncan said. “Schools and school officials have a legal and moral responsibility to protect children and young people from violence and abuse.”

Mark C. Sherburne, Curley’s acting replacement as AD, issued a statement Wednesday, saying the school is “devastated” by the allegations in the grand jury presentment against Sandusky.

“Our hearts go out to the children and their families,” he said.

The Evolution Of Google Plus And Where It May Be Headed

A-Rod won't be seen until 2015 after the MLB handed down a 200+ game suspension.
byBrian Sprowl
Read More 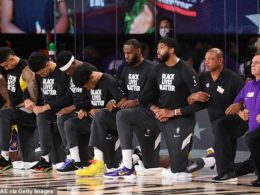