NFL Hall of Famer Deion Sanders is being sued by his wife for $200 million dollars. Friday morning…

NFL Hall of Famer Deion Sanders is being sued by his wife for $200 million dollars. Friday morning on The Ben and Skin show on ESPN Dallas 103.3 FM, Deion defended himself against the lawsuit and the allegations made against him and his daughter.

“Where are the going to get the money from?” is the question he asked the host of the radio show. Deion then went on to say “That’s just like me suing a homeless guy for some burger and fries.”

Pilar Sanders filed the law suit last week at the district court in Collin County. The reason for the lawsuit? Slanderous comments made on twitter by Sanders and his daughter Deiondra Sanders.

The daughter of the Hall of Famer tweeted that Pilar is “The number one gold digger of the year” and many other comments.   Deion is accused of co signing with his daughter tweeting “tired of all [Pilar’s] lies and foolishness.”

It is no surprise that all of this is happening after Deion Sanders filed for divorce in December to end is 12 year marriage. Just on thursday, the gag order requested by Sanders was granted by a district judge and the divorce case was officially sealed from the public.

It is a shame that all this is happening, could anything else happen to this NFL Hall of Famer? 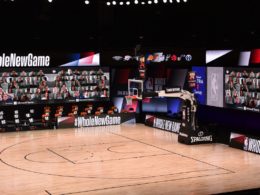