This shop actually had the audacity to sell bobbleheads of John Wilkes Booth…but people were buying them.

John Wilkes Booth is arguably one of the most infamous figures in American history because of his role in the assassination of President Abraham Lincoln.

Booth was a pro-slavery zealot, who never expressed remorse for murdering the president. That fact didn’t stop a gift shop near the site of the Battle of Gettysburg from selling bobbleheads in his image — equipped with a pistol, according to the Herald Sun.

The Booth dolls, featuring big heads attached to the bodies by springs so they bobble, were available for only about a week before the park superintendent, the foundation president and the bookstore manager decided they shouldn’t be for sale, Neil said.

She declined to state the reason for the decision, and messages left for the park and the company that operates the bookstore weren’t immediately returned.
The Booth dolls, which are about 18cm tall and come in boxes that look like the inside of the theatre where Lincoln was killed, sell online for about $US20 each. They have proved to be popular, as more than 150 of the original run of 250 have been sold, and more are being made, Kansas City, Mo.-based manufacturer BobbleHead LLC said. “There’s a market there,” sales manager Matt Powers said. “We like to let the customer decide if it’s a good item or not.”

Ben & Jerry's Is Supporting Gay Marriage Through Their Ice Cream 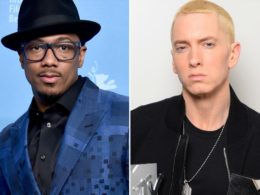 It stands to reason Joe knows how to smooth things over with the notoriously prickly Em, which Cannon seems amenable too.
byBien Luigi

[audio:http://theurbantwist.com/wp-content/uploads/2010/11/Swizz-Beatz-Feat.-Pusha-T-Pharrell-Bang-Bang.mp3|titles=Swizz Beatz Feat. Pusha T & Pharrell – Bang Bang] Does this joint Bang or is it a…
byBrennen Jones

President Obama to Appoint First Hispanic on the Supreme Court

In honor of President's Day in the United States, we take a look at 5 of the worst presidents as history remembers them.
byMatthew Rash