The father of the unarmed black teen whose killing has sparked widespread outrage said Sunday night that he and his family have been overwhelmed by sports stars such as Dwyane Wade and LeBron James speaking out about the case.

MIAMI (AP) — The father of the unarmed black teen whose killing has sparked widespread outrage said Sunday night that he and his family have been overwhelmed by sports stars such as Dwyane Wade and LeBron James speaking out about the case.

In an interview with The Associated Press, Tracy Martin thanked the NBA’s Miami Heat for “taking notice” of the killing. Martin is the father of 17-year-old Trayvon Martin, who was shot and killed in Sanford, Fla. on Feb. 26 by a neighborhood watch volunteer who claimed self-defense and has not been arrested.

The teen was wearing a hooded sweatshirt, known as a hoodie, when he was shot. On Friday, Wade posted a photo of himself in a hooded top to his social media pages, while James tweeted a photo of 13 Heat players wearing black hoodies with their heads bowed in a tribute to the slain boy. Carmelo Anthony and Amare Stoudemire of the New York Knicks made similar gestures.

“I saw a post that D-Wade had saying, ‘I am Trayvon Martin,'” Tracy Martin said. “To see all these athletes put Trayvon in the same sentence with them, it feels real good. Trayvon was an excellent athlete and if he could hear them saying his name, he would be so moved by it.”

The neighborhood watch volunteer, George Zimmerman, had called police to report the hooded figure as suspicious. Trayvon Martin was carrying a bag of Skittles and a can of iced tea while returning to the home of his father’s fiancée in the gated community.

As they did in Friday night’s game against Detroit, several Heat players scrawled messages about Trayvon Martin on the sneakers they wore on the court Sunday. The Heat have said they hope having players speak out about the killing helps “in our nation’s healing.”

“We just couldn’t imagine (anyone’s) son leaving to go play basketball or go to the drugstore or go anywhere and he doesn’t return,” James said Sunday in Oklahoma City, where the Heat were playing the Thunder.

Tracy Martin said a number of athletes have reached out to the family, asking how they can help.

A large rally is being organized in Sanford on Monday, coinciding with a city commission meeting, and more star power from the sports world is expected. Orlando Magic assistant coach and former NBA star Patrick Ewing plans to attend, according to a spokesman for the Martin family, as does Baltimore Ravens linebacker Ray Lewis — who makes his offseason home not far from where Trayvon Martin was killed.

Lewis plans on addressing the crowd at Monday’s rally.

“These athletes are saying, ‘It’s not about who I am. It’s about right and wrong,'” Tracy Martin said. “It’s like everybody’s taking notice. The Miami Heat came out in their hoodies, and that’s just saying, ‘We are people, we have hearts, we have feelings, we have emotions.’ That’s a warm feeling. The sports world has embraced this big-time.”

#ArtistTalk: Jessica Latshaw - The Subway Performance Seen Around the World 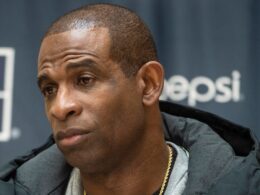 Gaspard got caught in a rip current and told lifeguards to help his son get to safety first. The guards couldn’t locate Gaspard when they returned, which led to an almost two-day search before officials called off the search.
byBien Luigi

The following players have been informed that they will be inducted into the Hall of Fame: Steve Nash, Jason Kidd, Maurice Cheeks and Grant Hill.
byTUT Staff