Traffic made the St. Louis Billikens watch their team get selected into the NCAA tourney at Best Buy.

Who are those tall guys sitting in the electronic section next to the big screen floor model?

If you were at the Best Buy in Secaucus, NJ yesterday, you may have encountered the Billikens basketball team who made an impromptu stop at the electronics giant after being delayed by traffic on their way to catch their charter flight at the Teterboro Airport. The plan was to watch show, which aired at 6pm ET on Sunday, in the airport terminal but traffic dictated that wasn’t going to happen.

Alas, there is a Best Buy o’er yonder someone bemoaned.

That Best Buy proved to be their saving grace as the Billikens name was announced early in the show as the #4 seed in the Midwest bracket where they will face #13 New Mexico St.

Just the latest chapter in a very dramatic season in where their head coach, Rick Majerus, died December 1st from heart failure. The team was able to regroup and have a breakthrough season winning their first Atlantic 10 championship and their first conference championship since 2000 when they were a member of Conference USA.

Word is out that after the Magic is eliminated from the playoffs, Mr Patrick Ewing will be interviewing…
byValaney

He’s Back: Allen Iverson’s A Sixer…Again

This is exactly what the NFL needs. I was being sarcastic in case you didn’t pick that up.…
byBrennen Jones 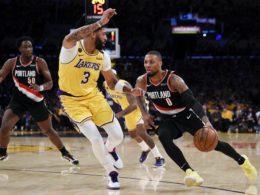 The hope for both is that neither injury is too severe to impact them long-term.
byBien Luigi