When Jay-Z said he was going to sell his stock in the Brooklyn Nets in order to be an agent I was shocked. Then I got a litle mad. After all that work he did, all the promotions, (pretty much he was the face of the franchise) and now he wants to be an agent!

He moved the team from a whole other city, and now he’s leaving? Well anyways, Jay is from Brooklyn and he wanted the whole world to know about it and trust me we know now. This man threw the Brooklyn Nets name around like it was his own, and I respected him for that because he had a plan for his team and made things happen. I always thought he could of at least waited until the season ended to end his run with the Nets but I guess not.

The whole Roc Nation Sports sounded like a wild idea but it was one that would surely work. Now just a few months later Jay-Z has signed his first NFL Player to Roc Nation Sports: Geno Smith.

The quarterback from West Virginia University was selected by the New York Jets in the 2nd round of this years NFL Draft, is now down with Hov. Character issues are what supposedly made him drop to the 2nd round of the draft as he was originally projected to be a first round pick in a draft thin on quarterbacks. Smith is already making his presence known by making a power move like this and hasn’t even hit the field yet.

Smith was originally represented by a more experienced NFL agency but made the power move to be represented by a rap mogul. Smith joins Robinson Cano and Skylar Diggins as the 3rd professional athlete to get down with Roc Nation.

Jay-Z is serious about his business so I wonder how this pairing will work out. Geno Smith should have some success with the Jets as i doubt he will have too much competition for the starting spot. Jay-Z’s always making moves I just wonder who will sign with him next.

LeBron James' dunk on Jason Terry was beyond nasty, it was plain rude.
byJerry Brown 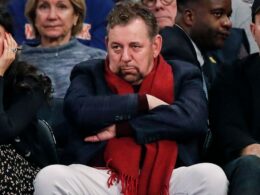 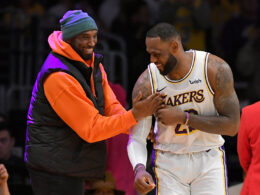