This past weekend, I saw the name Yasiel Puig trending. Never heard of him and did not think anything of it.

Major League Baseball announced Puig as their National League Player of the Week. Who in the world is Yasiel Puig?

Puig is a rookie right fielder on the Los Angeles Dodgers. Puig, 22, defected from Cuba in 2012, and established residency in Mexico, so he could play in the MLB. The Dodgers signed him to a seven-year, $42 million dollar deal on June 29. On August 1, Puig began his minor league career with the Rookie-League AZL Dodgers. After going hitless in his first game, Puig stormed back to a .400 batting average that included four home runs, three triples, and 11 runs batted in (RBI). This performance promoted Puig to the Single-A Rancho Cucamonga Quakes on Aug. 14. He did not demonstrate as much power at the plate, but still hit .327 in 14 games with the Quakes. Puig would have probably played more games last year, but he obtained a staph non-MSRA infection. According to MLB.com, Puig underwent a washout procedure on Sept. 18.

Puig started the 2013 season in AA. Puig played 40 games with the Chattanooga Lookouts of the Southern League. He hit .313, and had a slugging percentage of .599. The Dodgers called him up after Carl Crawford and Matt Kemp suffered injuries. What happened next was unprecedented and may be considered the best debut in MLB history.

Puig batted .464 with four home runs and 10 RBI in his first week. Puig hit his first career grand slam in Thursday’s 5-0 win over the Atlanta Braves. Puig has also proven in his first week that he can play defense as well. In his first game, Puig hustled back to the “warning track” to make the catch, launched a perfect throw to get the San Diego Padres’ runner out for the game-ending double play. Then, he threw a laser and gunned down an Atlanta Braves runner at third on Saturday. Despite the incredible show Puig is putting on, the Dodgers are only 4-3 with Puig in the lineup.

Puig’s accomplishment is remarkable. No one saw this coming, as they felt there would be a letdown after last year’s rookie class: Mike Trout, Bryce Harper, and Yoenis Cespedes. Puig’s power and instant success has had him compared to Bo Jackson. Puig could also be considered the real-life Roy Hobbs, a.k.a., “The Natural”.

However, nothing lasts forever. Eventually, pitchers and teams will adjust to Puig. The true test will come when Puig enters his first slump. If Puig can make the proper adjustments with his mechanics, and get back to this torrid pace, then he will be one of the best players in the league. If not, then Puig may only be a “one-year wonder”. Another thing to watch for is Puig’s health. Fox News Latino pointed out one particular play in Saturday night’s game where Puig slid into first base headfirst. Dodgers’ manager Don Mattingly said the move was “a little dangerous”.

For now, let’s sit back and enjoy the show. Except for Carl Crawford and Andre Ethier. They should be a little nervous right now. Puig may have taken their job.

The Baltimore lose their slugger, Chris Davis, at the worst time.
byPascal Mnyika 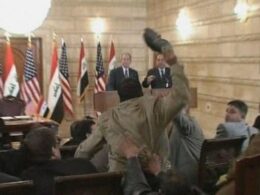 Al-Zaidi responded to the Florida shoe-throwing penalty with the same reaction as just about everyone that watched that game had.
byBien Luigi

The lawsuit filed says the death has caused mental suffering and Crawford should be held liable for failing to uphold a safe environment and management for all guests during the party.
byBien Luigi