June 26th will forever be the date that marks the demise of Aaron Hernandez’s career.

It also turns out that Hernandez had a troubled past. According to the Boston Globe, Hernandez had a history of marijuana use, a temper, and “shadowy friends”. The Globe also said an NFL Scout revealed his report this past Thursday. Hernandez’s report said, “Self-esteem is quite low; not well-adjusted emotionally; not happy, moods unpredictable, not stable, doesn’t take much to set him off, but not an especially jumpy guy.”

However, Hernandez was also regarded as a hard worker. The Patriots decided to take a chance, and drafted him in the fourth round of the 2010 draft. The Patriots even signed him to a long-term deal. This gamble did not pay off.

Hernandez let everyone down. According to NFL.com, the Patriots made the decision last week that if Hernandez was arrested, then they would cut him. The Patriots released this statement following their announcement on Wednesday:

“A young man was murdered last week and we extend our sympathies to the families and friends who mourn his loss. Words cannot express the disappointment we feel knowing that one of our players was arrested as a result of this investigation. We realize that law enforcement investigations into this matter are ongoing. We support their efforts and respect the process. At this time, we believe this transaction is simply the right thing to do.”

Hernandez was not granted bail. No trial date had been announced at this time.

Movie Review: "World War Z" Adds a Little Something Extra to the Over Saturated Zombie Genre

Come to the Lauderhill mall brawl

Tim Tebow is headed back to the NFL after two years out of the league thanks to Chip Kelly and the Eagles.
byTUT Staff

If healthy, Andrew Bynum makes Cleveland a very interesting team not only this year, but years down the line.
byBrian Sprowl 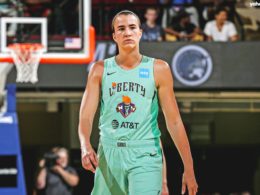 The 2020 No. 1 pick rolled her left ankle after crashing with Atlanta Dream guard Betnijah Laney in the second quarter of Friday’s game and went down injured.
byBien Luigi