Johnny Manziel a.k.a. “Johnny Football” cannot escape the spotlight. First, Manziel won the Heisman, now everyone is talking about his offseason.

Rumors surfaced earlier in the week that Manziel was sent home from the Manning Passing Academy for an illness. There was speculation that the illness was a hangover. Manziel was working as a college counselor at the quarterback camp. The media and Johnny Football’s fan base wanted to know the truth. They would get their opportunity Wednesday at SEC Media Days.

Manziel said he did not have a hangover. According to Sporting News, Manziel said his phone died that night, and he overslept since his alarm did not go off.

Yet, according to USA Today, Manziel’s father texted The Dallas Morning News that his son was dehydrated. This means Manziel could have drank too much or too little, depending on what he was consuming. Either way, Manziel’s answers did not satisfy the skeptics out there.

It also seems disrespectful to miss and show up late for meetings and practices at the camp. Hopefully, Manziel had the decency to at least call them first. However, Peyton Manning was not offended or think it was a big deal. Manning told USA Today that his brother Eli had missed their camp before, and received grief as well, and he wants Manziel to return next year.

Wait, there’s more. Manziel pleaded guilty to a 2012 misdemeanor charge for his involvement in a fight after Manziel’s friend started the confrontation by yelling racial slurs. Manziel will not have to serve any jail time, since he served time when he was arrested for failing to identify himself in June 2012.

Texas A&M football’s head coach, Kevin Sumlin, thinks everyone should calm down, as Manziel made mistakes just like everyone else. According to SportsDay DFW, Sumlin said, “He’s done some things he’s not very proud of. He’s made poor decisions, he’s made good decisions. The poor ones are publicized.”

Manziel learned some valuable lessons during his eventful offseason. After the ESPY’s, it is back to football, which is probably the best medicine for Manziel right now. He will need to regain his focus if he wants to repeat his Heisman performance, and lead Texas A&M to a national title. Manziel should start preparing for their SEC opener against Alabama. Nick Saban and the Crimson Tide are the defending national champions. Although Texas A&M shocked Alabama last year, the Crimson Tide will not make it easy for Manziel and the Aggies in round two.

"Whose Line" returns with big laughs and fresh ideas

Those who actually paid for Mayweather-McGregor fight and got poor streams may be able to recoup their losses.
byTUT Staff

The first man to beat Ali is now fighting for his life.
byAssociated Press 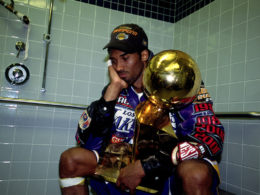