Singer Chris Brown turned down a plea deal on Wednesday for his alleged sidewalk fight in Washington, D.C. that happened back in October of last year.

Brown came to the courthouse with his lawyer Mark Geragos of California and Karreuche Tran, the singer’s girlfriend.  He sat beside Christopher Hollosy, co-defendant in the case and bodyguard, while the lawyers stipulated that prosecutors were not negotiating fairly.

Bernie Grim, Hollosy’s attorney, said his client is facing a simple assault charge, with a plea deal being for a simple assault.  U.S. Attorney Office of the District of Columbia spokesman Bill Miller said sometimes plea deals may consist of a deferred sentencing agreement or deferred prosecution agreement, which permits defendants to attain amnesty if they meet all the terms of the deal.

A tentative trial date of February 20th was scheduled, and prosecutors said they would give surveillance footage of the incident over to the defense.

Brown, who is known for his quick temper, was arrested for suspicion of felony assault and was taken to jail on October 27 when a 20-year-old man stipulated the singer punched him and broke his nose at W Hotel, which is located near the White House.

According to the police narrative, the alleged assault victim’s name is Parker Adams, who said the incident happened when he tried getting in on a picture Brown was taking with two other people.

Brown pled not guilty to a misdemeanor charge and checked himself voluntarily into rehab for his anger problems. The singer was kicked out temporarily in early November after he threw a rock at his mom’s car during one session of family therapy.

Should Brown be convicted on the simple assault charge, he’ll face up to 180 days behind bars and $1,000 in fines. There could be even more jail time in Brown’s future if the Los Angeles judge feels the singer did violate his probation in the Rihanna beating case. 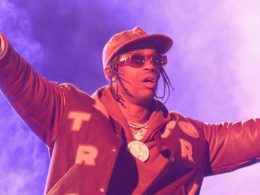 Travis’s announcement arrives after Nolan spoke about the rapper’s contribution to his Tenet film.
byBien Luigi

Mýa and Tink Go Street Style in New Music Video ‘G.M.O. (Got My Own)’