The latest issue of New York magazine is its 4th annual “Yesteryear Issue” dedicated to a century of Pop music in New York City.

Of course, you can’t mention NYC music without Hip-Hop, and the mag’s has a number of cover variants including vintage photos of Jay Z & the Notorious B.I.G.

Hip-Hop was healthily represented with the likes of Nas, DMC of Run-DMC, Afrika Bambaataa, 50 Cent and Mary J. Blige.

However, despite being on the cover Jay Z isn’t one of those rap acts. But even more surprisingly, Azealia Banks, who has yet to release her debut album and recently said she is leaking her oft-delayed project on April 15, did make the cut.

Although he doesn’t make the list, Jay Z does get his proper respect in the cover story.

And of course there’s Jay Z, whose great theme remains his own stratospheric rise from street-corner dope peddler to “a business, man.” These biographies put a musical spin on New York’s rags-to-riches mythology: In this town, a song about the gutter can put you in a penthouse.

Check out the cover that features what looks like a teenaged Jay Z (it says it’s circa ’97) rocking a black leather jacket and a Cincinnati Reds baseball cap. 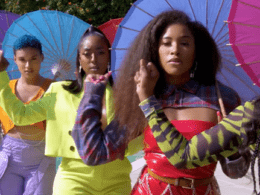 Hip-hop has a long relationship with aquatic vehicles in videos and lyrics. Here are rap's best boat party songs, or at least a handful of them.
byTUT Staff