Robin Thicke comes clean in “Blurred Lines” lawsuit deposition and admits to stealing songwriting credits. According to him, this also helped contribute to he and his wife, Paula Patton’s breakup .

The lawsuit between Marvin Gaye’s family over copyright infringement for Robin Thicke and Pharrell Williams’ “Blurred Lines” has just gotten a lot messier.

Today, transcripts of Thicke’s and Pharrell’s depositions were released, and there are admissions of drug abuse and lying on the part of Thicke about the song’s writing process.

The Hollywood Reporter obtained the legal transcripts, where Thicke admits to being high and drunk for both the recording of “Blurred Lines” and much of its 2013 promotion, leading him to lie to the media and claim writing credits when he really had none.

Under legal oath, Thicke claims that he lied to outlets such as Billboard about the songwriting process of his 2013 smash, stating that interviews where he cited Gaye’s “Got To Give It To You” as an influence were all lies.

“After making six albums that I wrote and produced myself, the biggest hit of my career was written and produced by someone else and I was jealous and I wanted some of the credit,” he said.

Thicke admitted that the process of recording “Blurred Lines” in and of itself was a little blurry because he was facing drug and alcohol problems.

“I was high on Vicodin and alcohol when I showed up at the studio. So my recollection is when we made the song, I thought I wanted to be more involved than I actually was by the time, nine months later, it became a huge hit and I wanted credit. So I started kind of convincing myself that I was a little more part of it than I was and I – because I didn’t want him – I wanted some credit for this big hit. But the reality is, is that Pharrell had the beat and he wrote almost every single part of the song.”

Pharrell echoed Thicke’s statements, claiming that artists will oftentimes take writing credits that are undeserved. “You know, people are made to look like they have much more authorship in the situation than they actually do. So that’s where the embellishment comes in,” he said.

And Thicke’s problem with honesty doesn’t end there.  He states that this is also what led to his separation from his wife Paula Patton. “I told my wife the truth. That’s why she left me,” he said.

Thicke is notably defiant in a lot of the deposition, stating that a mashup done by the Gaye kids to “Blurred Lines” and “Got To Give It To You” was like listening to “nails on a chalkboard.”

The copyright lawsuit between the Gaye estate and Thicke/Williams is scheduled to take to court in February 2015. 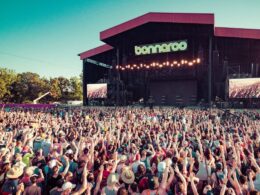 The festival asked ticket holders to roll over their tickets to the new festival date, but they also offered to give refunds if the new date could not be honored.
byBien Luigi

Tupac’s First Prison I.D. Card From 1995 is Going Up For Auction

Pac's first prison I.D. card from his infamous 1995 incarceration is going up for auction.
byBrennen Jones