Alfonso Ribeiro really wowed the viewers and the judges on Dancing with the Stars.

Dancing with the stars premiered on September 15th with various stars taking to the stage to showcase their Dancing skills.

Tom Bergeron and Erin Andrews, the hosts of the show kicked off the new season, in which one of the 13 celebrities will take home the coveted mirror ball trophy. The judges of this season are Len Goodman, Julianne Hough, Bruno Tonioli, and Carrie Ann Inaba.

The Premier saw Alfonso Ribeiro, the star of “Fresh Prince of Bel Air,” become one of the most notable figures while designer Betsey Johnson and Olympian Lolo Jones suffered significant missteps during their routines.

Here is a sneak peek of the performance scores:

Actor and model Antonio Sabato Jr. and Cheryl Burke, who danced the Cha Cha got a score of 25 out of 40. Judge Len Goodman was quick to praise Antonio but added that he needs to work on his footwork with other judges both giving encouraging comments.

Lea Thompson and Artem Chigvintsev danced the Foxtrot and got a score 32 out of 40. Lea was a ballet dancer as a kid, as she could not hide her excitement of getting back to the ballroom.

All the judges were impressed by the performance, and none of them had negative comments for the pair.

Actress Janel Parrish of the Pretty Little Liars and Valentin Chmerkovskiy, who danced a super sexy Jive to “Bang Bang” got a score of 29 out of 40.

72 year old Fashion designer Betsey Johnson partnered with Tony Dovolani got a 20 out of 40.

Tavis Smiley, an author and talk show host, with Sharna Burgess went for the Foxtrot, which earned the pair a 29 out of 40.

Nascar driver Michael Waltrip and Emma Slater got a 25 out of 40 for dancing the Cha Cha.

Mean Girls star Jonathan Bennett danced the Jive with new pro Allison Holker and got a 30 out of 40.

Comedian and actor Tommy Chong also danced the Cha Cha to Snoop Dogg’s “Drop It Like It’s Hot” with Peta Murgatroyd and got a 27 out of 40.

UFC Fighter and actor Randy Couture danced the Foxtrot with Karina Smirnoff and scored 31 out of 40.

Bethany Mota and Derek Hough scored 32 out of 50 after taking to the stage, a fun jive to Taylor Swift‘s “Shake It Off.”

And the man to watch, Fresh Prince of Bel-Air star Alfonso Ribeiro and Witney Carson, who danced the Jive, managed to score 36 out of 40, which was the highest of the night and caught all by surprise with Len labelling it the best dance of the night while Julianne said it was unbelievable.

Ryan Gosling, Eva Mendes One of The Most Admirable Couples In Hollywood Welcome a Baby Girl

Critically acclaimed as one of the finest choruses in the country, the 110-year-old Mendelssohn Choir of Pittsburgh (MCP) is re-inventing choral music for Pittsburgh’s 21st century.
byChristina Jeter

Q&A with James Chressanthis, the Director of Photography for NBC’s ‘Gone’

"A picture is worth a thousand words", but when you view NBC's 'Gone,' Director of Photography James Chressanthis will leave you speechless.
byChristina Jeter 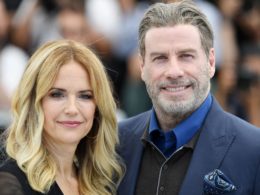 “It is with a very heavy heart that I inform you that my beautiful wife Kelly has lost her two-year battle with breast cancer,” Travolta wrote.
byBien Luigi