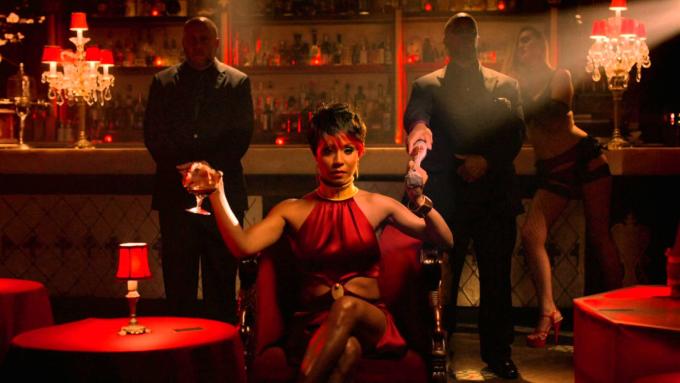 Jada Pinkett Smith, or the mobster Fish Mooney, will say goodbye to Gotham after season 1.

The actress, 43, revealed Friday on Live with Kelly and Michael that she doesn’t think she’ll be back in the second season to reprise her role as the hotheaded nightclub owner.

“I signed for a year, and the year is up,” she told the hosts. “But, there are some great things coming ahead on Gotham – believe you me, there’s a lot of good stuff coming.”

She says she still loves playing the villain, who was one of the few characters on the show that was a new addition to DC Comics’s Batman universe.

One thing she didn’t explain was why? Maybe she’s ready to move on to other projects, maybe negotiations for a new contract fell through and maybe Fish Mooney is going to be killed off which with her announcement that she’s leavingm definitely has a lot of fans speculated that Fish Mooney may soon be sleeping with the fishes.

The shows producers might not have been expecting Smith to drop the news, but released a vague statement that didn’t clear up anything:

“Gotham’s” producers released a statement on Smith’s bombshell through the show’s reps: “Fish Mooney’s storyline takes a lot of interesting twists and turns into the finale of season one of ‘Gotham.’”

This is the comics books universe we’re talking about, though, so nobody’s necessarily ever really dead or gone permanently.