Recently, Nicki Minaj pointed out some shady (but truthful) observations pertaining the music industry, but Taylor Swift decided to make it about herself.

After the VMA nominations were announced, Nicki Minaj and her fans noticed two videos by the popular rapper were missing. “Feeling Myself” (ft. Beyoncé) was completely snubbed with zero nominations despite it being popular and starting the sports jersey one-piece trend.

“Anaconda” was nominated for a few awards, but failed to receive a nomination for Video Of The Year. Love it or think it’s the worse video ever, we all knew about the video and have seen it being referenced by hundreds of thousands, if not millions, of people.

Her fans were publicly upset about her snubs and took to Twitter to express this atrocity.

The Tweets and Taylor

Anyway, Nicki spilled some truth about the VMAs, award shows, and the music industry in general. Nicki Minaj tweeted:

If I was a different "kind" of artist, Anaconda would be nominated for best choreo and vid of the year as well. 😊😊😊

If your video celebrates women with very slim bodies, you will be nominated for vid of the year 😊😊😊😊😊😊😊😊😊😊😊😊😊

You could definitely argue that an award shouldn’t matter if your goal is to impact popular culture, but Nicki’s observations shed some much-needed light on the neglected issue of race in the music industry. As you can see above, Nicki didn’t reference anyone specifically, but someone known for being a smart business woman decided to add in her interpretation of the tweets.

Taylor Swift replied to the last tweet above, stating:

Obviously, Taylor thought that Nicki was talking about her, even though Nicki didn’t mention Taylor Swift in any of her tweets. If the shade represents…

All that Nicki did was point out that artists like her (black/rap) don’t get the same recognition as other female artists (white/pop). Taylor Swift ignored the point and tried to change it by making the problem about women pitting other women against each other. The main problem with this is that

The next explanation is a unconfirmed conspiracy, but here is what Nicki Minaj tweeted (in response to a fan saying she’s confident)…

I'm not always confident. Just tired. Black women influence pop culture so much but are rarely rewarded for it. https://t.co/2xOvJzBXJX

And here’s where the theory comes from. Taylor Swift then tweeted…

To me it seems like Taylor Swift is trying to be a White Savior. Taylor comes in and basically says, “If (more so when) the music industry rewards me, I’ll allow you to be in my spotlight.” See what I’m saying? Additionally, she neglects to acknowledge racism within the music industry: a.k.a. the core issue Nicki was trying to convey.

Taylor Swift has until tomorrow morning (July 22) to clarify what she was trying to say. I can see her sleeping on this conversation and then talking about it, but after 10 a.m., maybe 1 p.m., anything that Taylor tweets is just PR. I wouldn’t believe what “Taylor” said is truthful after that time period. Just some food for thought.

As one might expect, entertainment news outlets posted articles about this. Well, by this I mean the Nick Minaj and Taylor Swift feud.

Websites have been featuring pictures of Nicki Minaj as being the “Angry Black Woman” while pictures used for Taylor Swift were more “innocent”. Below are some examples…

Taylor is just looking over her shoulder while Nicki looks like she is about to start something – they could’ve at least used a picture of her from this year. (Image: Entertainment Weekly) 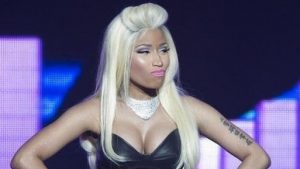 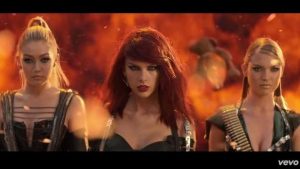 Above, Nicki is show with a sour look on her face and with her hands on her hips while Taylor is being fierce.

What does Taylor Swift have to say about these websites pitting her and Nicki Minaj against each other? I’m sure we’ll see her response to this soon enough.

The ironic thing about this feud is that it showed the differences between how Black women are portrayed in the media and how White women are portrayed by the same people. Plus, if Taylor Swift cared about the race issue in the music industry, she would’ve said something like “I agree with you Nicki, that is wrong”, but she just continues to make it about herself as some feminist-hero.

Nicki made a great point but her message was overshadowed by Taylor Swift’s replies, making it about herself.