Glamour Magazine has named Caitlyn Jenner “Woman Of the Year” for 2015. This is the biggest crock that I’ve heard. What is this world coming to?

Caitlyn Jenner has been named “Woman Of The Year” by Glamour Magazine. *blank stare*

How can a person who’s been a woman for six months be “Woman Of The Year”?

Wouldn’t she have to be a woman for at least 12 months? What the fuck has Caitlyn Jenner done that makes her so amazing  that she deserves to share the same honor as Natalia Vodianova, Robin Roberts, Reese Witherspoon, First Lady Michelle Obama, Lupita N’yongo (MY GIRL) or Laverne Cox ( THIS woman has had to struggle. Check the receipts.)?

I am so confused. We’ve watched  Caitlyn’s “secret” transition to womanhood on “Keeping Up With The Kardashians”. When Bruce Jenner finally decided to make his full transition to Caitlyn Jenner, she received love, support and endless covers to upscale magazines that gave her undeserved praise for bravery and courage. Yes, UNDESERVED PRAISE FOR BRAVERY AND COURAGE. WTF? This entire post should just read “wtf?” because wtf?

Caitlyn did what the fuck she wanted to do. She’s no advocate for transgendered folks that live the struggle every damn day. At least, 21 transgendered women have been murdered this year and Caitlyn Jenner has yet to speak on that while the world swings on her non-existent jock.

Keep in mind that most of the victims were black and latino. She serves herself and her own platform. She gets to dress up in Gucci, have her hair and makeup done and live the glamorous life while everyone tells her how great she is because she is living her truth.

Caitlyn Jenner’s truth is privileged BULLSHIT. She lives in a world where she hasn’t struggled with her identity nor has her life been in danger. She is fully protected by her rich, white Republican privilege. She isn’t taunted by groups of men that would snuff her out in a New York minute. She doesn’t give a fuck about any of that or YOU!

I’m appalled that Glamour Magazine would slight women who live struggles and are advocates for change by giving this broad anything. I have never bought this magazine but surely- they’ve given me a reason to NEVER buy this clusterfuck of a publication now. 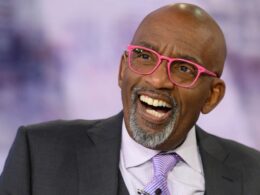 Al continued to say that he goes back for a blood test in January, and he’ll continue to undergo testing every six months for the next five years.
byBien Luigi

"The View" hosts fires back at her estranged husband by filing divorce paperwork of her own.
byPascal Mnyika