ESPN Lays off Hundreds, What Happened?

ESPN recently cut 300 employees. This past Sunday, ESPN’s own Chris Berman made a public statement before the 1 p.m. American Football games outlining the hard work these men and women have put forth during his tenure with the company. A teary-eyed Berman took to his on-screen presence to personally thank the staff members for giving their “literal blood, sweat and tears” to the company.

This layoff is just the first round with a few more anticipated. There are two main reasons for ESPN’s struggles: Losing subscribers and spending large amounts on sports broadcasting. 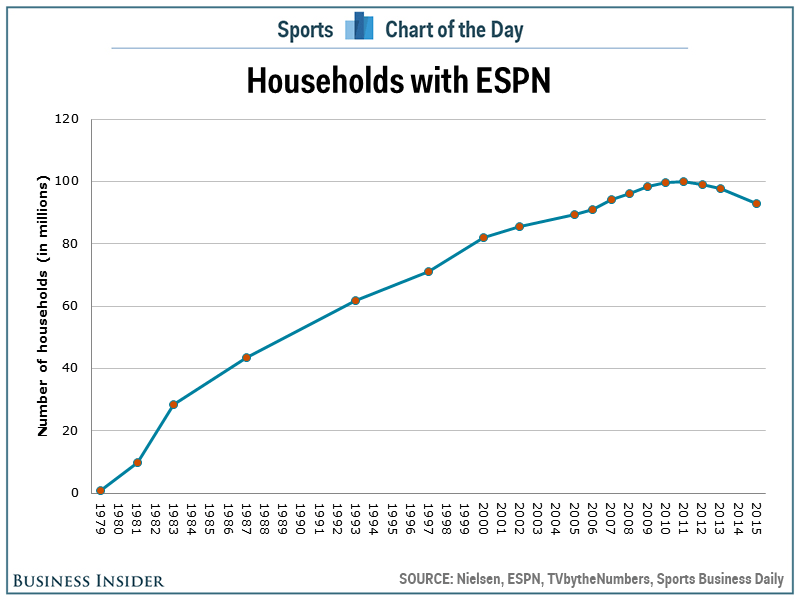 In regards to losing subscribers, the chart above shows ESPN is declining in regards to households with subscriptions to the company. Cable companies are composing packages that exclude ESPN, resulting in a loss of 8.5 million subscribers over the past 4-5 years.

Additionally, ESPN is spending egregious amounts on the rights to broadcast certain sporting events. The new deal concerned with airing Monday Night Football for the NFL equates to $1.9 Billion. The amounts for other major and non-major sports or events are not far behind. ESPN predicts an amount of nearly $6 Billion combined from all major commitments by 2018 and beyond.

Essentially, ESPN is overpaying for many of their events including Monday Night Football. Fans and critics alike are concerned that there may not even be a bidder within $500 Million of that number (Sports Business Daily). 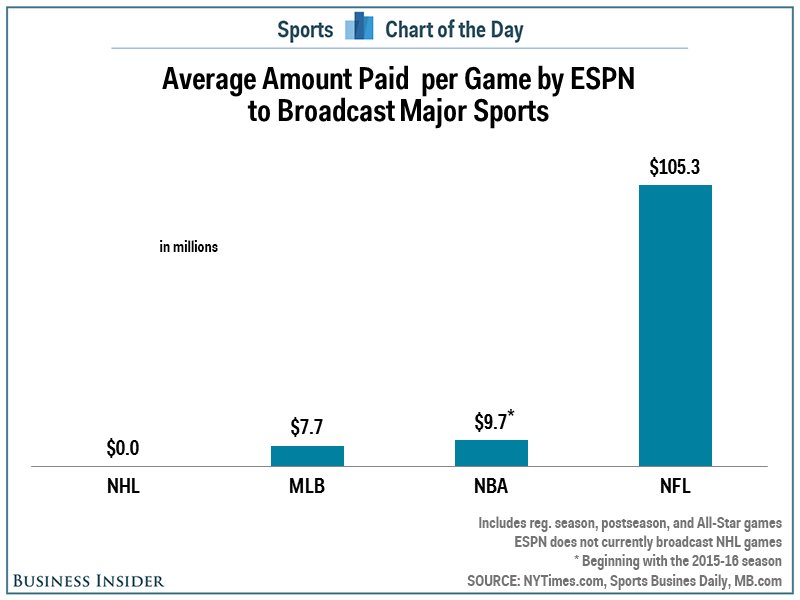 The rights to air Monday Night Football games will undoubtedly earn ESPN a profit. However, overpaying is not a smart business decision. This set the template for overpaying for the rights to air NBA and MLB games. ESPN is competing with itself when it comes to bidding for rights.

ESPN is not ignoring what they’ve done. The moves, including layoffs, continued a troubled period for the sports media giant that started when Disney CEO Bob Iger told CNBC, “The business model may face some challenges over the next few years.” Consequently, these concerns raised eyebrows and advised many to sell-off media stocks during the past summer.

ESPN continues to focus on ‘major’ American sports that generate more revenue, neglecting the likes of soccer, golf and racing. Rights have recently run out or are about to run out for the company to air the likes of the FIFA World Cup, the U.S. Open golf tournament, and NASCAR races.

Disney’s sports media arm is definitely trying to right the ship and pivot on certain aspects of their business plan. Let us all hope that they maintain afloat.

On Wednesday, Maria Taylor’s Time At ESPN Came To An End

$100 Million Deal Reportedly In Talks Between Beyoncé And Disney

Aaron Rodgers’ Retirement Is Being Predicted By Sports Books

In A Slick New Video For ‘Steam,’ Leon Bridges Busts A Move