Hotel Transylvania 2 is a welcome return for the gang of monstrous misfits, only this time there is one extra. Ghoulishly entertaining family fun.

Drac is back! And he brings with him his ghoulish friends from the Hotel Transylvania for this well executed and charmingly funny sequel.

Following on from the Hotel Transylvania (2012), the hotels owner Drac (Sandler) now accepts humans, which is just as well as his daughter Mavis (Gomez) marries one, in the form of Johnny (Samberg). When Mavis gives birth to little Dennis Drac begins to get worried that his half-human half-vamp grandson is showing zero signs of becoming the scary little monster he wills him to be. Whilst Mavis and Johnny go to visit Johnny’s parents in LA, Drac attempts to lure Dennis into getting his vampire teeth and enlists his friends from the hotel to help. Monstrous giggles ensue as the gang try their best to get Dennis his fangs.

Hotel Transylvania 2 is not Inside Out, nor is it Up, and neither does not pretend that it is. It does not need to have the impetus that those epic Pixar films have in order to deliver its message. There is a charm and a freakish camaraderie that make it a joy to watch, whilst not taking an epic emotional toll. The second half is superior but that does not mean the first half is dull, it just has more restraints in terms of locale.

The film offers an accessible portrayal of acceptance and equality without prejudice. In a world of changing attitudes Hotel Transylvania 2 is a poignant yet delightful look at how important it is to accept people for who and what they are, despite what you may prefer them to be. This is achieved through sharply written humour and enthusiastic performances, and delivered in a way that isn’t preachy or overwhelmingly emotional. There is a focus on humour and entertainment rather than message which results in the message being delivered without the audience even realising they have received it. It is good to see a children’s animated film with adult appeal that isn’t waist deep in meaning and morals. 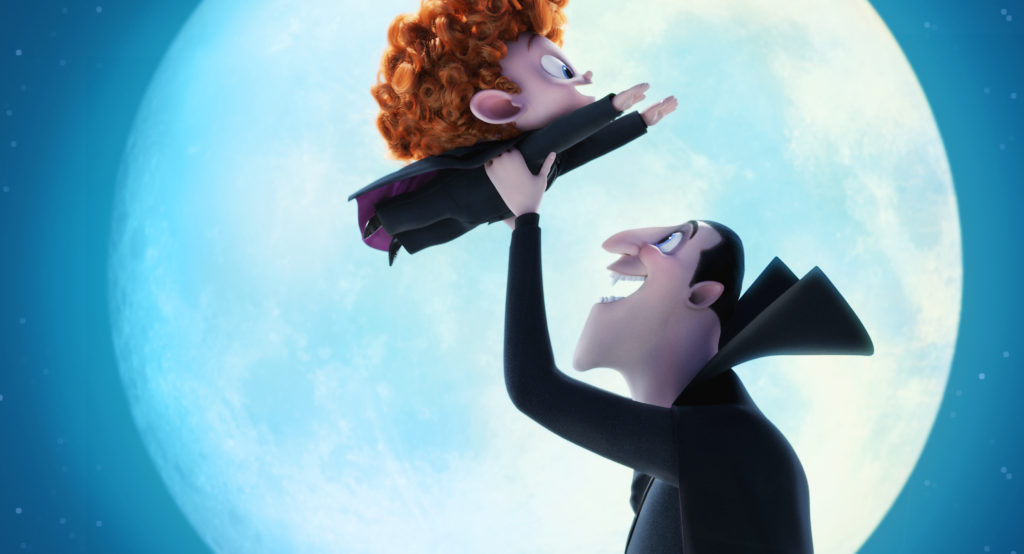 It is bizarre to think that the same person that produced the incredibly underwhelming Pixels, or the simply awful Jack and Jill (which starred Dana Carvey, also in Hotel Transylvania 2) can write, or at least co-write, something as witty and well observed as this. This is Sandler’s best work in quite some time, raising the question is Sandler better when working off screen and aiming his work at a younger audience? It would certain seem that way with his stereotypical Transylvanian accent adding to the films ambience rather than providing an annoyance, and his spirited performance ensuring the pace of the film.

The real pleasure in Hotel Transylvania 2 comes from Blobby. Whilst the gang’s initial treatment on him is blatant bullying, the gelatin looking Blobby turns into an integral part of the group and his viscous character offers pure joy to the audience. Despite having no dialogue he is one of the most memorable characters within the film.

Kevin James returns as Frankenstein which marks the tenth appearance of James and Sandler in the same project. You would think they would learn. Whilst in Pixels James’ character was completely unbelievable and utterly ridiculous in its pure notion, as Frankenstein the performance is light-hearted and admirable. Selena Gomez and Andy Samberg bounce of each other perfectly as newlyweds Mavis and Jonathon, but even more rhythmic and pleasing is the relationship between Jonathan and Drac. Jonathan’s innocence and empty headedness liveliness juxtapose against Dracs ominous deadpan seriousness in a way that is endearing. Steve Buscemi and David Spade are as solid in their performances as ever, with Buscemi’s wolf character Wayne being a particular delight. All of the characters offer humour that young audiences will enjoy, as will the most stoic of adults.

There are a number of ‘Easter egg’ style details that accentuate the all-round appeal of this film. The character of Bela, named after horror heavyweight Bela Lugosi, the use of Mel Brookes as the voice of Vlad (Brookes directed 1995 comedy Dracula: Dead and Loving It). The location of Santa Cruz that Mavis and Jonathan visit is the original set of the teen vampire cult classic Lost Boys and even Jonathans final costume bears a striking resemblance to Gary Oldman’s character in the 1992 film Dracula. There are a number of these references throughout the film that adults will be able to spot, and which give the film universal appeal.

Whilst Hotel Transylvania 2 may not carry the gravitas of the key Pixar films, it brings with it an understated charm all of its own. It never feels as if it is competing with the likes of this year’s Inside Out, and through that it has its own confidence and appeal. Strong performances and inspired scriptwriting make this film laugh out loud funny for all ages. Much like Drac, Hotel Transylvania 2 may have cold skin but it has a warm heart.
—
Director: Genndy Tartakovsky

All Lives Matter: Why Was Corey Jones Murdered by a Plain Clothes Cop With No Badge?

ESPN Lays off Hundreds, What Happened?

Nadia Gray acting career is so 'Bright' that she shines in Netflix's upcoming film along such Hollywood A-Listers, which include Will Smith and Joel Edgerton.
byChristina Jeter

'The Green Book' is a must travel road trip that everyone should take.
byChristina Jeter

Here’s the Teaser Trailer for Martin Scorsese’s ‘The Irishman’