Ronda Rousey was upset by Holly Holm during last night’s bout at UFC 193 and proved how boxing still matters.

It’s one thing to get knocked out and it’s another to get completely destroyed, which is what Holly Holm’s upset of UFC top star Ronda Rousey accomplished.

In less than 24 hours, Holm has destroyed Rousey physically, mentally, and perhaps irrevocably destroyed her image as this unbeatable queen titan of UFC.  She may have also destroyed the ridiculous notion that a boxer can’t hold their own in the ring with an MMA fighter.

Everyone and their momma had an opinion on Rousey and how she couldn’t be beaten.  Call it media hype or whatever, but Rousey had people fooled.

Some folks even thought that she would stand a chance, no not a chance, but rather be able to beat Mayweather in a fight.  Yes, that “undefeated 49-0 professional boxing champ” Floyd Mayweather.

My wife thought that too, no matter how hard I tried to explain to her how that didn’t make sense.  And how it wouldn’t work.  And I’m not even close to being a Mayweather fan, but I recognize greatness and I explained how she should too.  I tried to rationalize the point that Rousey and Mayweather aren’t even in the same league.  I didn’t even mention the fact that Mayweather’s obviously a male as part of the argument, which would be another advantage for him, not that he would need one. I pretty much just stuck with the fact that he boxes and that he’s pretty damn good at that.

My wife then went on to say that Rousey could beat me too in a fight and that Rousey was great.  I just shut up at that point.  I knew then that there was nothing more that I could say that would change my wife’s views of what she believed Rousey to be, this somewhat mythical superheroine because for some strange reason that’s what Rousey has become.  This Captain Marvel, a superhero to many, but especially women and feminists in particular.  But how did we even get to this point?

How did we get to the point where someone such as my wife, who has never seen Rousey fight (other than in an Instagram clip because some of her fights were literally that short), nor Mayweather for that matter, just assume that Rousey would win in a hypothetical fight between the two of them?

The hype.  Hype like we’ve never seen before.  People keep trying to compare this fight to the Tyson and Buster Douglas fight.  And although I can see the similarities between the two fights with Holm being a huge underdog such as Douglas, but there was no hype when it came to Tyson.  Well, there was some, but Tyson was mostly the real deal.

Going into last night’s fight, Rousey was 12-0. Holm was 10-0.  In addition to Holm’s 10-0 record in MMA, she was also 33-2-3 fighting professionally as a boxer.  But yet with figures like these, no one gave her a chance against Rousey.

Just a few months ago, people gave Laila Ali the side eye when she brought up the fact that she could take Rousey in the ring.  And for comparison sake, her professional boxing record was 24-0 and she retired undefeated.

Maybe it was because all of Holm’s MMA fights lasted at least until the second round, whereas Rousey bouts lasted mere seconds.  So that created this mythology that Rousey was invincible.

Let’s all hope that what Holm did last night officially ended any debates and killed the hype machine on whether a top ranked boxer could go toe to toe with a top ranked UFC fighter. Yesterday’s fight may have been MMA, but it looked very much like a boxing match that Rousey wasn’t prepared for.

Holm was on her game from the beginning, stunning the champ with jabs and keeping her at a distance in the opening round, and becoming the first fighter to win a round against the previously undefeated Rousey.

Then, in Round 2, she landed a huge left kick to the head, sending Rousey to the mat and knocking her out cold. Holm immediately pounced, throwing down thunderous hammer fists before the referee jumped in and called a stoppage at 59 seconds into the round.

“I don’t know, I’m trying to take it all in. This is crazy!” Holm said in the post-fight interview inside the cage. “Getting in here, I just felt so much support — I thought, ‘How can I not do this with all this support?’ I had the best coaching, from standup to grappling to wrestling.

“I have to say, everything we worked on presented itself in the fight. Every grab she tried to get, on the cage, I have not spent this much time in the gym before any fight in my life.”

There was some bad blood between the two before the fight. They got into it at the weigh-in, and Rousey refused to touch gloves before the opening round.

Rousey’s record falls to 12-1, notching her first loss, while 34-year-old Holm remains undefeated at 10-0… and becomes the new champ. 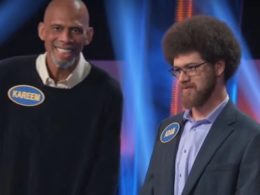 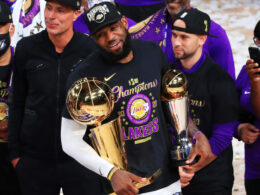 After speaking about how everyone, from the Lakers organization to the team to Rob Pelinka, earns to be given their respect, he also made sure to note he too wants his damn respect.
byBien Luigi