Satanic Temple Offers ‘Protection’ For Muslims, Then Takes It Back

After Paris attacks, two chapters of the Satanic Temple offered ‘support’ and ‘protection’ for persecuted Muslims. The national organization had other ideas.

The Satanic Temple may not be the first “church” you think of when it comes to offering safe havens to persecuted groups.

But with Islamophobia intensifying amid the aftermath of the Paris attacks, that could be about to change.

According to the Washington Times, two chapters of the Satanic Temple offered support and protection for Muslims.

The two chapters were the Minneapolis and San Jose affiliates.

However, in the time since their “invitations” went viral (and showed up on freaked-out conservative blogs like WT), the national organization demanded them removed.

The national body said this was done because the “Satanic Temple focuses its advocacy exclusively on broad ideals that affect everyone and only promotes campaigns that it can effectively execute.”

“The Satanic Temple believes that all people should act with empathy within the bounds of reason.”

It is possible TST removed these posts because of the organization’s disdain for religion.

While Christianity is often their main “adversary,” that’s not to say they feel any more supportive towards Islam.

That said, the organization may have been doing Muslims a favor in ordering these “invitations” removed.

In a Thought Catalog piece entitled, “Why American Christians Need to Stop Hating Muslims,” writer Jamie Berube points the finger at Christianity for stoking the fires of Islamophobia.

“If you claim to follow the teachings of Jesus Christ, you must love Muslims,” Berube writes, adding that Christians “must treat them with grace, compassion, and humility.”

“To do anything less than this is to muddy and totally miss the point of the Christian gospel,” she added.

Berube identifies as Christian and felt many in her faith needed to hear those words.

The “love” she speaks of goes for “extremist radicals like ISIS, as well as peaceful followers who reject and condemn [their] ways.”

With many Christians turning a new, fearful eye toward Islam, the last thing Muslims likely need is an organization with the name “the Satanic Temple” going to bat for them.

But what do you think, readers? Are Christians the main driver behind Islamophobia, or does blame lie elsewhere?

Author
Aric Mitchell
Aric Mitchell has been a full-time freelance writer for close to a decade. His work has appeared for The City Wire, Huffington Post, Inquisitr, and a number of other online and print publications. He also manages niche blogs for a number of clients and works as a SEO consultant for businesses looking to optimize their blog content. His novel "The Congregation" is available from Amazon.
Previous Article

5 Ways To Combat The Holiday Blues

Governor Schwarzenegger Could Care Less if You Smoke a Joint

Gov. Arnold Schwarzenegger says no one cares if you smoke a joint. The Hollywood actor-turned-governor signed a law…
byAssociated Press 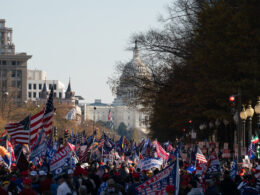 The crowd was largely protesting false claims of “voter fraud,” to “show support for our President” and to “preserve the integrity of the vote.”
byBien Luigi
Read More

Sarah Palin is desperately trying to stop "The Rogue" from airing any more of her dirty laundry.
by