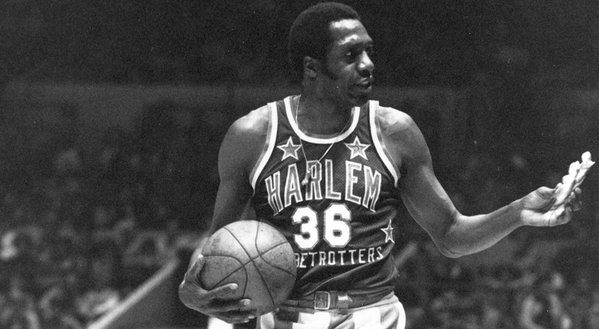 Meadowlark Lemon offers a pretzel to a referee during a Harlem Globetrotters game in 1978. (Suzanne Vlamis / Associated Press)
Basketball

“For me, it would be Meadowlark Lemon.” – Wilt Chamberlain, on who he thought was the greatest basketball player of all time.

The “Clown Prince” was known for his incredible tricks, on-court charisma and comedic antics, and his sensational ability to entertain audiences as part of the touring Harlem Globetrotters basketball team for almost 25 years, starting in 1955, years after a stint with the Army. Lemon also had otherworldly basketball skills, including halfcourt hook shots with astonishing accuracy and dazzling no-look passes well before the Magic Johnson era began in the NBA.

Despite his humble beginnings, Lemon had big dreams, deciding to join the Globetrotters at age 11 after seeing a newsreel of them performing. Lemon maintained that role for 24 years, through the height of the Globetrotters’ popularity, until he left the team in 1978.

The Washington Post wrote that as proud as Lemon was of his performance on the court, he was perhaps prouder of his performance in another arena: He was ordained as a minister in 1986, according to his website. He appeared on multiple television programs, including an episode of Scooby Doo.

Lemon was inducted into the Naismith Memorial Basketball Hall of Fame in 2003.

He is survived by his ten children.