Affluenza Teen and Tamir Rice: A Tale of Two Americas

With no indictment against the officers who shot Tamir Rice and the Affluenza Teen given a chance to escape to Mexico after killing four people, it’s easy to see why people are continually fed up with the judicial system.

In life, we are told that there’s no such thing as “black and white,” and that there is a gray area in between that often times goes unnoticed. That there’s often “more” when it comes to hearing a story from just one side.

And often times it’s true.  We’ve all heard the saying, “there are three sides to every story…” but when it comes to Tamir Rice, and after the Grand Jury decided against indicting the Cleveland Police Officers on any charges for  shooting and killing this 12-year-old boy, I am finding it extremely hard to find that gray area and am still searching for it.  I’ve pretty much given up on it.  All I’m seeing is black and white, with shades of blue in between.

I just find it ridiculous that for folks like me, who like to give the cops the benefit of the doubt beforehand, on the basis that you’d think a cop couldn’t be this stupid to shoot a kid, only to see the evidence, and then feel bamboozled and betrayed by a system that you had hope was telling the truth.  The keyword is “hope.”  Why is it that we have to hope for that kind of thing anyway?  For the powers, that be, to tell the truth?

We all know that police officers take dangerous risks, perhaps more than any other profession.  So when the initial reports stated that Tamir Rice had the toy gun out and that he was pointing it at the police officers, most people sided with the officers and was like if that did happen, the shooting would be justified.  Well, the video evidence finally got released and determined that the initial report was a lie.

And don’t get it twisted, the cops didn’t just shoot Tamir Rice.  They practically performed a drive-by.  I’ve never heard of or seen a cop do a drive-by until these cops shot Tamir Rice.

They also said they gave him a chance to drop the “weapon.” Again, the video determines that was a lie as well.   Things happened so fast, that they weren’t even able to assess the situation although when they phoned it in, they certainly made it seem like they did.

So when all else fails, they now go on the defensive and start blaming him.

It’s Tamir Rice’s fault that he got shot because of the kind of games he was playing.  Because he was playing with a toy gun, something that a lot of boys his age play with.

Tamir Rice, standing at 5 feet 7 inches, was now too “big for his age” to cast doubt on his innocence as a child.

The prosecution didn’t even doubt or want to doubt the police officers’ account of the incident, although there is now video evidence of the incident.  Basically, they never wanted to prosecute the Police Officers and so they didn’t. They didn’t “second guess” the police officers although one would argue that as prosecutor their job is to second guess.

It’s mind-boggling to think that in this day and age where everything is caught on video and you can see how the incident unfolds with your own eyes and still “question” what happened.

…meanwhile in Mexico, Ethan Couch, better known as “Affluenza Teen”, was just captured after being on the run from authorities with his mother at his side.  Pizza was their downfall.  They got hungry, ordered pizza, and the cell phone that they used to order the food is what helped lead authorities to them.

In case you aren’t familiar with Affluenza Teen’s story, it pretty much goes like this…

Couch got very drunk and high on Valium, among other substances, lost control of a Ford F-350 pickup registered to his daddy’s sheet-metal company and started a deadly chain of collisions that killed four people. His blood alcohol measured at 0.24 percent. That’s three times the legal limit for an adult and infinity times what the law allows for a minor.

He stole beer from a Walmart before a female friend said she needed a tampon. So Ethan piled six other teens into the pickup and took off. He hadn’t gone far when he careened into two parked vehicles, killing a stranded driver, a youth minister who had stopped to assist and two other Good Samaritans also trying to help.

The defense argued that Ethan had effectively raised himself, that he had lousy parents, and that it would be unjust to blame Ethan for his actions. Of little matter, apparently, was that Ethan had an underage drinking arrest from only a few months before the wreck, this one involving beer, vodka and a teen even younger than he was.

The prosecution accepted the defense team’s recommendation to send this young man to a plush rehab center in Southern California, in part because she didn’t think Ethan would get what he needed from the mean, old state juvenile system.

And Ethan’s father Fred Couch, recognizing that money cures most ills, pledged to foot the annual $450,000 bill. Let’s presume this is not an option available to the great majority of teen intoxication manslaughter defendants.

The boy who never learned consequences had that reinforced, this time by a judge.

He was sentenced to 10 years of probation and counseling, but guess what, he violated his terms of probation when his probation officer couldn’t contact him only to find out that he had fled the country.

Now even after being captured, Crouch and his mother are fighting extradition back to the States claiming that they have a legal right to remain in Mexico.

Ohio is an “open carry” state so, even if the cops assumed Rice was at least 18, and they also assumed his gun was real, they had no cause even to stop him, let alone open fire.  Where were Tamir Rice’s rights?

In America, I guess open carry is “open season” on the people who scare you.  Unfortunately, Tamir Rice fits this so-called description whereas Affluenza Teen didn’t.

…and there’s nothing scarier than that.

The woman continued to follow him as he approached the check-out line, and she eventually caught the attention of other shoppers as she let them know he was one of the officers charged for Floyd’s death.
byBien Luigi 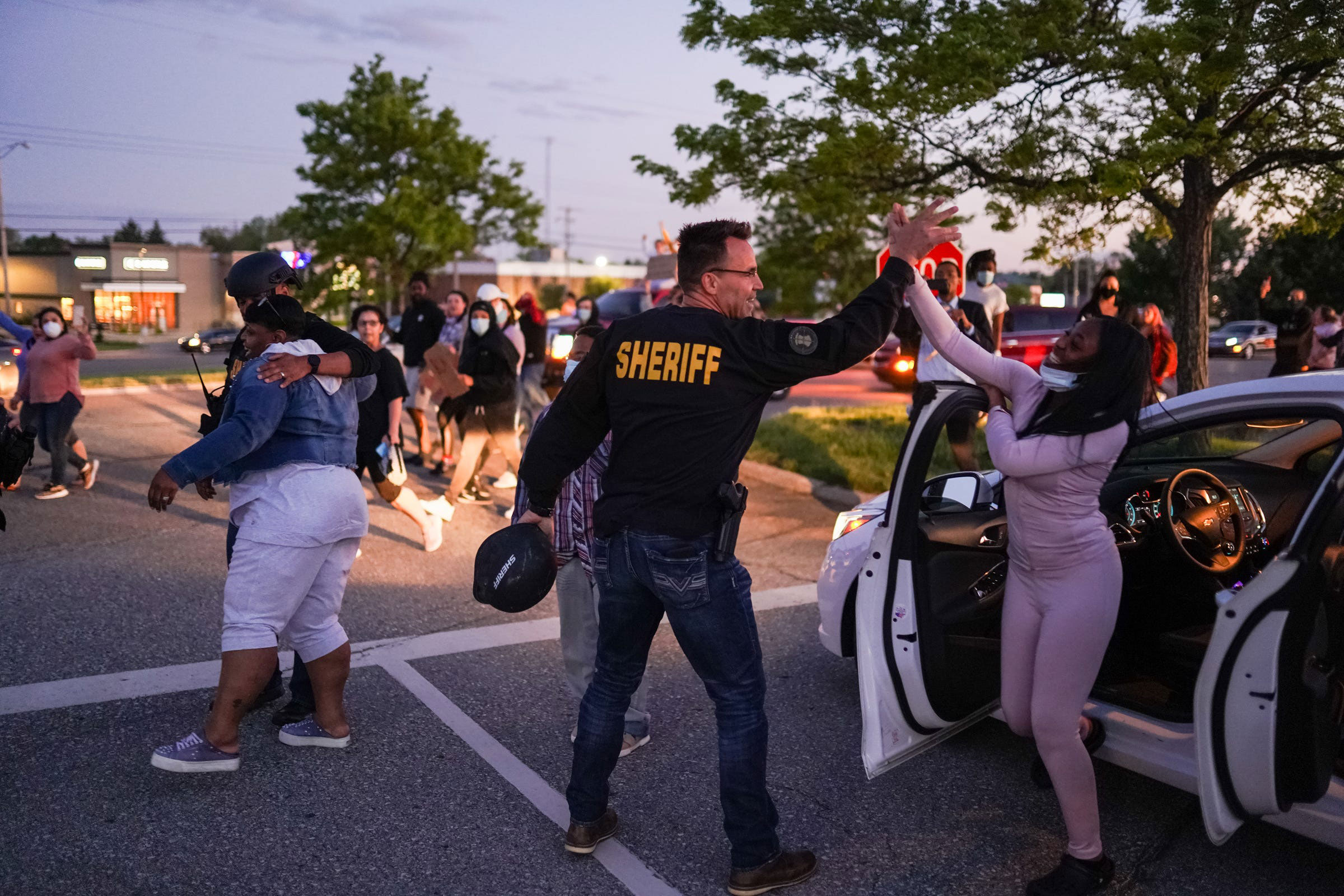 The new look Clippers took on the old look Lakers and showed them who's the new King of L.A.
byBrennen Jones