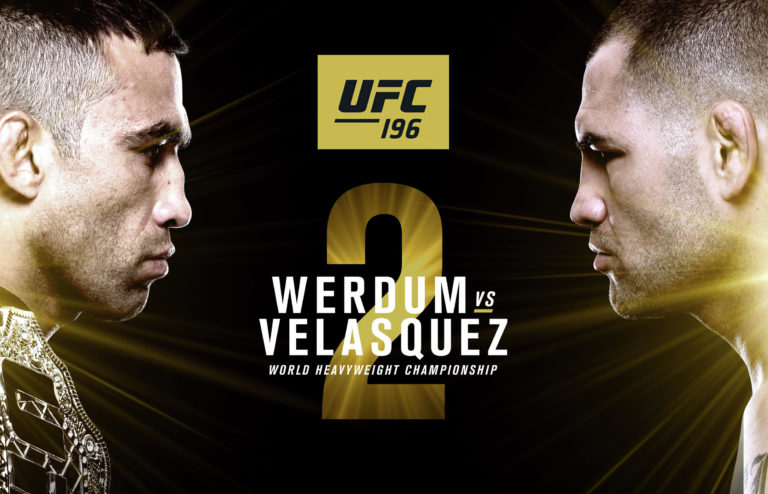 The UFC 196 is just around the corner, February 6, 2016, and the main event is the highly anticipated rematch between heavyweights Fabricio Werdum and Cain Velasquez, respectively no.1 and no.2 in the MMA heavyweight rankings. Dee Friedman has Velasquez as the slight favorite to win this rematch.

Werdum and Velasquez first competed against each other in the UFC 188, in June 2015. After an exciting back and forth match, Werdum stunned the world by securing a third round submission victory against Velasquez, becoming the UFC’s undisputed heavyweight champion.

At 6’1” and 240lbs, Cain Velasquez is an American Mixed Martial Artist known as the ‘cardio king’ because of his incredible endurance. This endurance was challenged by the high altitude of Mexico City which Velasquez says is the main reason that he lost the fight against Werdum. He has said he is looking forward to the rematch as there is nothing better than exacting revenge on an opponent that has previously beaten him.

Fabricio Werdum, standing at 6’4” and 236lbs, is a Brazilian Mixed Martial Artist and is just as excited about the upcoming UFC 196, as he feels ready to show why he is the best in the world. As the first fighter to submit Velasquez, Werdum has cautioned that his opponent should ‘watch his right arm’, as he will not hesitate to do the same again.

Since the rematch will take place in Las Vegas, which is at sea level, Werdum has noted that Velasquez will not have the altitude to blame for a defeat this time.  This makes it clear that he intends to maintain his title.

Now that they are familiar with each other’s fighting techniques, the rematch is anticipated to be fast paced and intense. Will it be Velasquez’s powerful and extremely swift punching combinations or Werdum’s guillotine chokehold that secures the desired victory?

The fight card for the main event can be viewed here.

Other main card events for the UFC 196 are:

No.2 welterweight Johny Hendricks vs No.13 Stephen Thompson

No.13 heavyweight Roy Nelson vs No.15 Jared Rosholt

No.2 flyweight Joseph Benavidez vs No.10 Zach Makovsky

With this line-up, the UFC 196 is certainly going to be a night of intense fighting, and one that will definitely be enjoyable.

Watch an extended video preview of this highly anticipated event over at MMA Junkie.

Who are your picks to win?

Is Congress on Crack?