In my opinion, black women can be very insecure. This is one of the greatest human tragedies because we are at the same time some of the most beautiful and visually captivating beings on the face of planet Earth.

I’m at liberty to voice my opinion on this topic, as I am a 36 year old black woman who was born, raised and has lived in America my entire life. I’ve observed our insecurities with ourselves and each other ever since I was a small child, and I mean as young as pre-Kindergarten school. I was born in Wisconsin but much of my childhood was spent in Arkansas (the south). This was in the 80’s. My mother was born in 1955 and she pretty much taught myself and my older brother that your “claim to fame” is the texture of your hair, and your skin complexion. If your eyes were any color other than dark brown, or God gave you something exotic like freckles or brown or red hair, you were one of the élite.

I never really understood why these ideas my mother subscribed to were true but I definitely knew that they were law, based upon the way people spoke in my presence. I heard phrases like “good hair”, “nappy headed”, “high- yella”, “red bone”, “black as midnight”, “black and ugly” (black was always associated with ugly) “pretty light skinned”, “pretty mixed child”. These weren’t terms that other races used to describe us, these were words that WE, black people used to describe each other.

To be honest, I’ve NEVER been called a Nigger and I’m 36 years old. But the term “Nigga” was commonly used within my family and within my household. My mother had eight siblings and they all ranged in complexion. One of her older sisters almost looks mixed. Her skin tone is very fair and she has always had excessively long sandy brown hair. My mother’s two youngest siblings were the darkest in complexion and their hair texture was very coarse and it grew very slowly. I don’t remember very many positive things being said about them. One was male and one female, they endured the most teasing and ridiculing by their siblings.

My mother was what is commonly known as “color struck”. In the south, if you are color struck it basically means that you judge people based upon their skin complexion. In your opinion, people whose complexion is more fair than most are “better looking” and they are somehow better people than those with a darker skin tone. I’ve been told that there used to be a “paper bag” rule. A paper bag rule essentially means that if your skin is the color of a paper bag or lighter, you are acceptable to black persons who are “color struck” or who deal with self-hate issues. My mother never literally held a paper bag up to anyone but she may have done so subconsciously… Okay, she was definitely doing so subconsciously.

My mother always told myself and my siblings that she wasn’t attracted to dark-skinned men and that light-skinned men were better. She is an even toned woman and both her parents were black. My father is very fair-skinned and my parents separated when I was three years old. My mom always dated either very fair-skinned or white men. She also had this thing about light-skinned women. She didn’t like them. In my opinion, she was jealous of them, almost to a point of despising them.

As a child I could definitely tell that there was a difference in how people of different complexions were treated and how they treated me. As I grew older, I didn’t agree with much of the ideas that my mother taught me. Once I began dating, I realized that my preference was for dark-skinned men. This was something that my mother completely disagreed with. I also noticed how as black women, we tended to be very judgmental of each other and very jealous. I didn’t know very many black girls who were confident enough to even complement other black girls. I found it hard to keep female friends in high school and even in early adulthood because they always seemed to talk about me behind my back or to be jealous of me in some way.

I always wondered why this was. It’s as if, as long as we can make other girls feel bad about themselves, we can feel good about ourselves and that’s bananas! I’ve always been very confident and very friendly and I always tried to make the women around me feel good about themselves. I haven’t always received that back form most of the black women that I’ve come across. I remember hearing the comedian Michael Colyar say something so powerful on the documentary “Black Girls.” He said “Everybody wants to be black, except for black people.” And this is so true, self-hate is so prevalent in our race.

I notice how, on social media some black women drag people of other races for having corn rows or getting butt injections or lip injections. They claim that they are trying to “Take what’s ours.” I’ve always found this to be absurd. If someone copies you, you must be doing something right. Most of the time they admire you and if you’re confident enough in yourself, you’ll know that no matter how hard they try, they can never be YOU and that’s what makes you SUPERIOR.

I saw a post a few months back on “The Shade Rooms” Instagram page about a makeup artist by the name of Jennilie Perreault @JCoperro who posted a picture of herself in dark makeup with the caption “Today I transformed myself into an African-American, at least I tried.” As soon as I saw this I thought two things, (1) She looks gorgeous! And (2) This seems to be completely innocent. 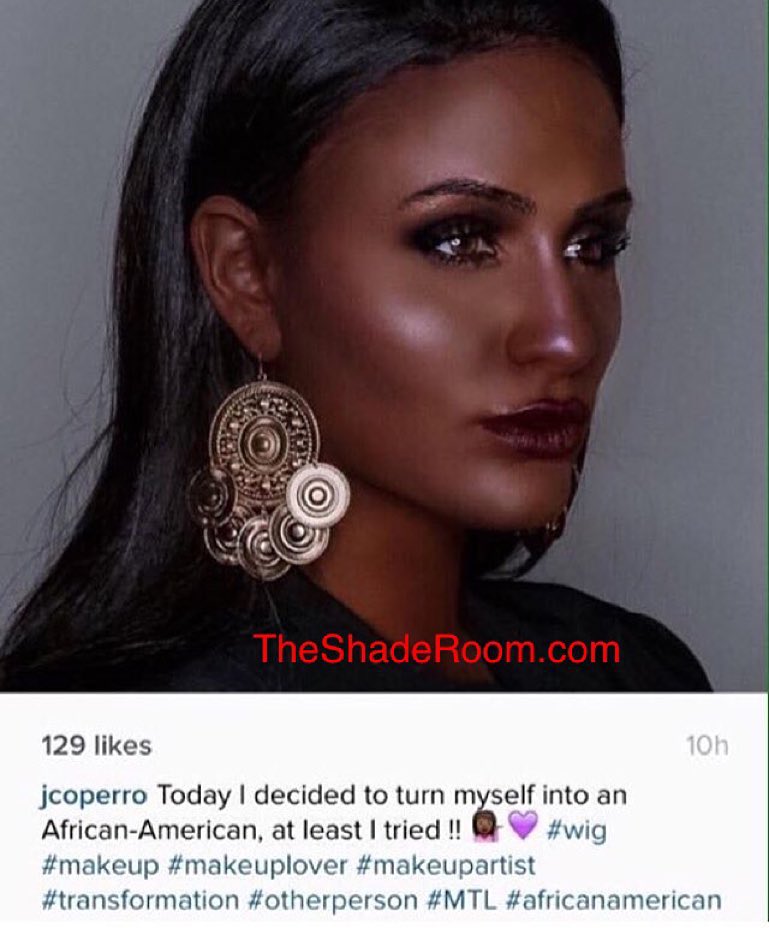 Well the general consensus on Instagram was apparently on the contrary. They drug this poor woman for filth! So much in fact that she had to close down her Instagram account! They were saying that she was in “Black Face” and talking all this jibber-jabber about “Black appropriation”! This woman was in no way making fun of black women. Her makeup was tastefully done and she looked like a beautiful black woman. Why get offended by it when she clearly has an admiration for dark skin. If you own something, no one can ever take it away from you, IT’S YOURS! If she didn’t think it looked good, why would she have put it on her face?

Another Makeup Artist, Jan Bonito @jbonito, is also on the Instagram and Facebook. He’s made a name for himself by making himself over as black celebrities and media personalities. His posts receive mixed views but for the most part, Bonito has been praised for his talents. Am I missing something here? Why do we as black people get to pick and choose what’s appropriate and what isn’t? I’m just as confused as the white people are on this one. 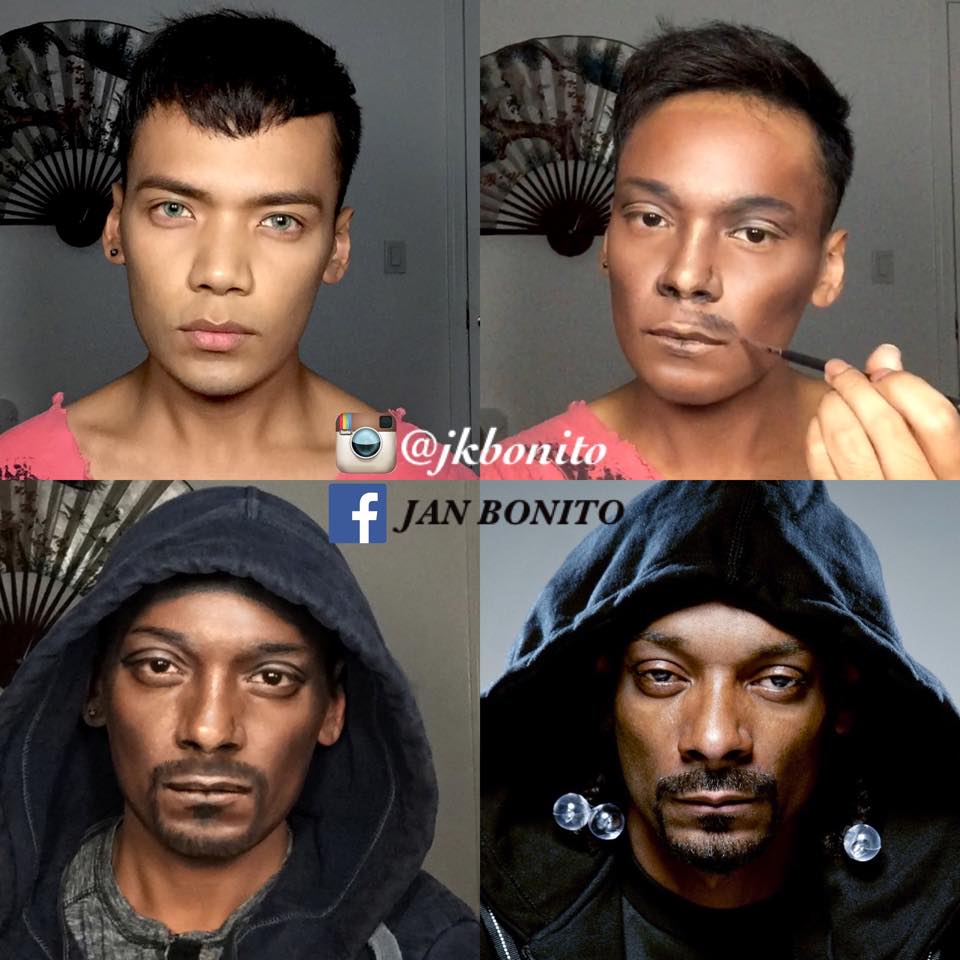 I noticed another Instagram post around the time the documentary “Light Girls” came out. Will Smith’s ex-wife, Sheree Fletcher, posted one picture of herself and Kim Whitley and another with a group of light-skinned black women with the hashtag #LightGirlsRock in their captions. Black women were very up in arms about this. She received multiple hateful comments rebuking her for using this hashtag. Now wait a minute! It’s cool for us to say #BlackGirlsRock and for black women to post memes about how much they love their dark skin but it’s a no-no to be proud of your skin color if your light-skinned? Who created these numb-skull set of rules?

It’s almost like an over weight woman posting pictures of herself and boasting about her self-pride and people patting her on the back and congratulating her but if a thin woman does it, she would be perceived as being conceited. This double standard is such bull crap. Everyone should have pride in themselves, even if they have a beauty that the media upholds.

Sheree finally had to chime in on her post with the following statement: “…This is a shout out to THE DOCUMENTARY that aired last night on OWN, I was in it sharing a bit of my story. LIGHT GIRLS, is BILL DUKES’ follow up to “Dark Girls” (and yes they do rock too!), where we have the opportunity to share our stories, our heart breaks, struggles and hurt because of the color of OUR skin…” But she shouldn’t have had to explain herself. 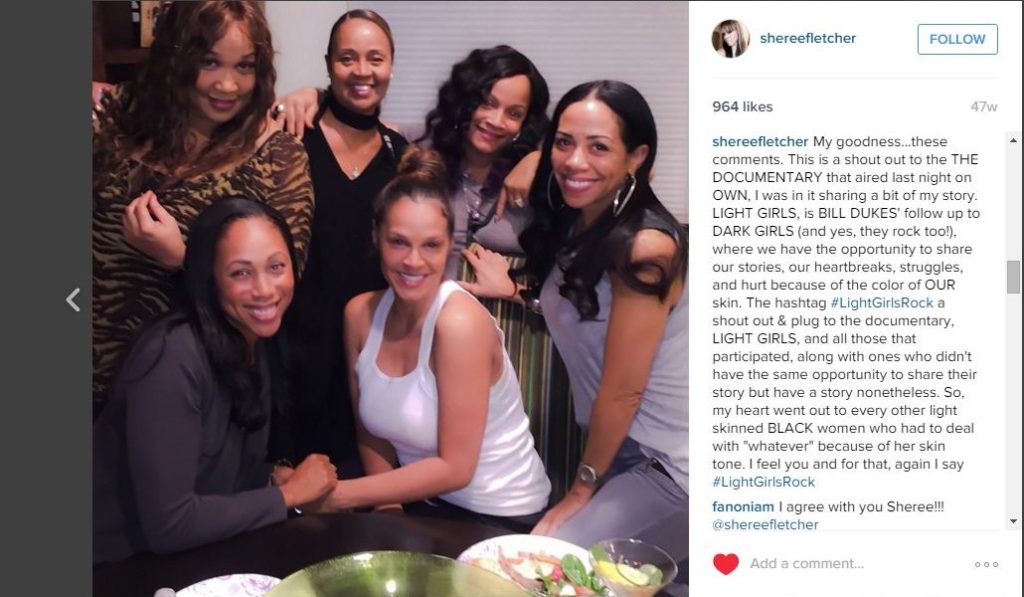 We’ve got to get it together black women. These double standards and jealousy is just not healthy or necessary. If we ever expect for other races to love and admire us, we first need to love and admire ourselves. We are all black American women no matter how light or dark we happen to be.

I love what Cicely Tyson told Robin Givens in “The Women of Brewster Place”: “I am alive because of the blood of proud people who never scraped or begged or apologized for what they were. They lived asking for only one thing of this world: to be allowed to be. And I learned through the blood of these people that black isn’t beautiful and it isn’t ugly; black is! It’s not kinky hair and it’s not straight hair; it just is.”

Along with Tucker Carlson, Ted Cruz, and Don Jr., Kyle Rittenhouse will give a speech at something called ‘AmericaFest’

On January 6, CNN Juxtaposed Fox News Hosts’ Frantic Text Messages About Trump With Them Downplaying The Events: ‘They’re Not Journalists’

Lady Gaga Swears She Made Out With Salma Hayek While Filming ‘House Of Gucci,’ Without Proof

Seattle Department Ex-Cop Who Punched Woman Claims Wrongful Termination From Department; Police Chief Had a Vendetta Against Him

How Nomadic Workers Can Make Unfamiliar Cities Feel Like Home

Only Three People Knew Andrew Garfield Was In ‘Spider-Man: No Way Home’