Cypress Hill’s Sen Dog drops a verse on IIIZ’ ‘Get Away’ but the rest of the album is not so ill.

If you’ve been wondering where the members of the 90s hip-hop group, Cypress Hill have been up to, now you know what at least one of them is up to.

Founding member, Sen Dog, 50, drops a verse on IIIZ’ album’s opening track, “Get Away.” Unfortunately, that’s the best song on the 13-track EP.

While the tracks hold spacey vibes and mellow piano keys, it lacks a certain magic to make you want to re-listen as the vocals often fall flat. It could likely work extremely well as an instrumental album. It certainly would be funner. That’s not to say the singers aren’t talented — they’re just not matched with the right background sounds.

“Manic Pixie” which has gained the most amount of streams with over 5,000 proves this as it’s three minutes and forty-four minutes of funky electronica vibes. Another note: I hope they get rid of the pyramid aesthetic — unless they’re Egyptian?

Some other fun notes: The album’s producers have an impressive resume. Ronnie King performed the keyboards on 2Pac’s “Still I Rise” and “Until the End of Time.” Alvin Taylor has worked with George Harrison and Elton John while Ditch is a rap artist who’s worked with Shock G. The latter is also signed to the same label as IIIZ, Hood and Associates.

Check out IIIZ full album below. 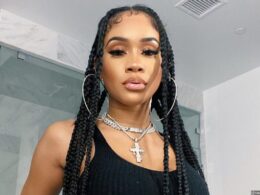 While she got a lot of congratulations from her fans, an expected fair share of critics were also present.
byBien Luigi

Social media brought this group together, and through their music, they're hoping to bring the world together.
byBrennen Jones

Wiz and Amber are ready to tie the knot. Let's just hope Kanye won't cause an interruption.
byBrennen Jones

He’s Baaaaaack! Kendrick Lamar returns with yet another hit with DAMN. With his enthralling wordplay, intellect, and…
byAshly E. Smith