Record scorer Rachel Banham gets a tweet from Kobe after game winner.

With just eight seconds left in the game, Rachel Banham not only managed to win the game for her team but she did it with an amazing play. The intense game was close with Minnesota leading by one point until Iowa managed to score a two-pointer putting them in the lead. It all came down to the last two seconds. Banham took her shot right at the buzzer to win the game for the Minnesota Golden Gophers.

The play was so impressive and exciting that even Kobe had to tweet about it.

Clutch @rachelbanham15 not many players can side fade, let alone for a game winner #mambablood

This is not the first time that Kobe has been impressed by Banham. Kobe also tweeted out his congratulations to Banham when she tied the NCAA record by scoring 60 points in double-overtime against the Northwestern Wildcats. 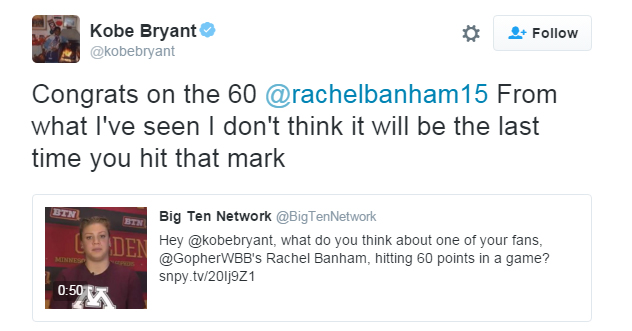 During His Bulls’ Resurgence, DeMar DeRozan Praises Kobe Bryant For His Approach To ‘Becoming Better’

J. Cole Has Reportedly Completed His Basketball Contract And Will Return To The US