Zendaya Is Bae And I’m Not Ashamed To Love Her

Bae and Zendaya are synonymous.

Bae. Zendaya is bae. 19-year old pretty on fleek bae. The multi-talented Disney star showed up at the 2016 Grammys looking like a boss and on February 2nd, she dropped a hot duet with bad boy Chris breezy titled “Something New”.  She is getting her grown woman on with this throwback-flavored single that samples TLC’s “Creep”. It’s grown but not raunchy. I’m all in my vieja feels over it. This isn’t her first time at the rodeo, though. She’s a veteran in the industry and she has emerged into a beautiful young woman. Let’s just hope the Disney “crazy child star curse ” doesn’t rub off on her like her counterparts (Selena Gomez, Raven, Demi Lovato and Miley Cyrus). No shade.

Some of you may remember her from Disney channel’s hit show- “Shake It Up” which aired from 2010-2013 and Bella Thorne.  I will let you in on a little secret… I LOVED this show. Especially Zendaya. A.k.a “Slaydaya” but better known to me as “Bae”. The show featured her dancing so I had no idea that she could sing. She reminded me of my daughter who was a championship all-star cheerleader at the time.

After the show ended, Zendaya released her self-titled album and dropped MY JAM- “Replay”. Ahem.. I mean “my daughter” LOVED that song and “she”, even, has her own choreography which includes ticking and rolling. That album had some nice joints on it. It wasn’t bubblegum at all… which is surprising for Disney.

Bae is, now, working on her second solo album and starring in a new sitcom on the Disney Channel called “K.C. Undercover”. She even has fine ass Odell Beckham vying for her attention of course under the watchful eye of Zendaya’s father.

I hope to continue to see her star shine and from the looks of the moves that she is making- she will. I think I’m going to cop her second album when it comes out as well. Now- baby girl slayed with that mullet but I’d look a plum fool with one so I will just admire bae from afar.

Is Your Green the Same as My Green?

'The Catch' is Coming to #TGIT

Review: Tomas Doncker Gets Politically Charged About Racism in ‘The Mess We Made’

The veteran blues artist Tomás Doncker is back with some experimental sounds. While Doncker is usually associated with the 1970's No Wave sound, he takes on a different vibe with 'The Mess We Made.'
byVictoria Johnson

Director Robert Zemeckis is literally going back into the past for his next project...a stage musical of "Back to the Future."
byTUT Staff 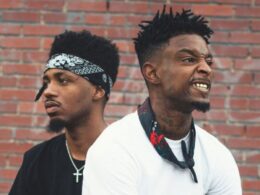 It all seems to have worked out, as 21 Savage and Metro Boomin jointly landed the second No. 1 albums of each of their careers.
byBien Luigi