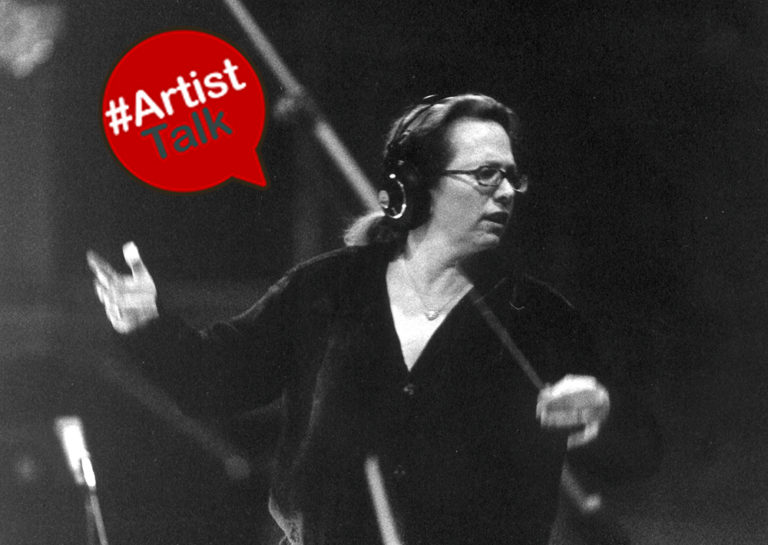 Laura Anne Karpman is an American composer, whose work includes scoring for films, television, video games, theater, and concert. Her 2016 Grammy-winning release is extraordinary, partly because Ask Your Mama is generically unlike any other work ever composed. It is based on a cycle of poems titled by Langston Hughes, written in 1960, subtitled 12 Moods for Jazz and available for purchase on Itunes.

So what’s next on the agenda for this Grammy winner? Laura has added the WGN show Underground on her resume, as she is the music composer for the new series, set to premiere March 9th.

How did you come to find out about Underground?

Well, I read about the show. I called up a friend, Tony Scudellari, the head of Sony’s Music for Television Department, “I think Raphael Saadiq and I should pair for this show.” He agreed with me and it went from there.

How does a composer audition vary from an actor’s audition? And do you have to audition? Or do they just know they want you already from previous work of yours they have heard?

It’s every possible thing you can think of. Auditions are all over the map, sometimes. You may have to put together a reel. So for example, you’ll get a call about a show, and then you hear basically what type of music they are looking for or you’ll put together music you have done in the past that reflects the genre sound they are interested in.

Did you just write the music for upcoming episodes on Underground and/or will you be guest starring on the show as well too?

No, we just wrote the music.

Is there any footage of you during your creative process making music for the show?

Yes, you can view that here.

It mostly interviews Raphael Saadiq and John Legend and you can see me in the background conducting. The idea behind the show is truthful. I think what John and Misha brought to it was a certain aesthetic. They didn’t want to necessarily do period music of that time, but they did want to have certain pieces of that era influencing the way the score went. The show opens up with Black Skinhead by Kayne West, but they clustered the elements of that music and wanted that to kind of find its way into the score, but they also wanted the score to have everything from Rock N Roll, Hip Hop, 19th century music and everything into between. So to fit the show we had to have a tremendous artist range.

At what age did you know composing music was your passion in life?

I started really early; I started when I was 7. It’s all I have even done.

What is your main reason for creating music? Winning awards, such as a Tony or Oscar or simply just doing what you love?

Both. Awards come and go, which is super groovy. Creating film music is this public-private experience. It started out with me in my studio with Raphael throwing ideas around, seeing what resonated, seeing what works, I tested ideas out alone in my studio, and he tested out ideas alone in his studio. Then it’s looking at the picture, figuring out what the drama is and on a project like this we sat down with the EPs (executive producers) Joe Pokaski, Misha Green, andJohn Legend and talked about the way the music of the show should go.

Like,  what is the sort of sound we are looking for? What is the traumatic intent? What are the actors doing? What needs help? What needs support? What doesn’t?

Then I would go back to my own space and utilize my notes and do it! After creating it, I would send it on to them and see what they think about it.

Did you need to meet with any of the talent of Underground to get inspired to curate music for the show?

I meet some of the actors after the fact. I didn’t meet when we started because they were still filming the show in Louisiana. In television is comes from the writers and EPs, because they really tell you what the intent is, and where they are going. They are the mothers and the fathers of the whole project.

How do you relate or can you relate to a show dealing with slavery, African Americans, and degradation?

We have to recognize the diversity and perspectives of this country history and how it’s a value to moving forward and never backward.  The fact that Raphael and I have come together to collaborate on the show is a beautiful thing, I mean not only is he black and I am white, he’s a man and I am a woman, but we come from very different backgrounds. He comes from Gospel, R & B and Folk music, and then I come from classical music and film scoring. And I think what Hollywood should be doing is being leaders, by having a leadership role in terms of moving things forward in our lives and country. And I want to be a part of that and I know Raphael does too!

Will the audience be able to purchase music from the show?

I hope so, but not currently at this moment. It will happen, but not right off the bat.

What is your favorite thing about creating music?

Is there anybody in the future you like to work with or already have?

A lot of people! Kasi Lemmons and Shonda Rhimes, I mean the list could go on and on!

So to wrap things, tell us #WhatsYourTwist.

You know when Raphael and I first started to work together he said, “If we are who we are, will get along great.” And I think that is far true, and it’s my true because I am who I am I don’t pretend to be someone else. And that is where I find my center in identifying myself.

For more about Laura Karpman, you can visit her at www.laurakarpman.com

Make sure you stay up to date with her work on WGN Underground and remember to use the hashtag #Breakfree.