Is North Korea a Real Threat?

Many have dismissed North Korea’s countless threats over the decades since the Cold War ended. However, the debate is not as one-sided as many would expect. Here in the U.S., the idea that we should or should not fear the small Asian country has divided American opinion.

On Debate.Org, a website which many can go to to voice opinions and vote on important, subjective topics, the topic of “Is North Korea a Threat?” is divided fifty-fifty. The side that argues North Korea as a threat includes some interesting thoughts. The country is left completely unchecked and possesses values of a morally unstable, emotional teenager. On the other side, users note the country’s continual threats as a sign that they are not capable of anything… yet. Long-range missiles are not easy to create, and it appears that many do not believe the North has them.

Either way, both sides agree, to some degree, that the government needs to be overthrown. How long we can wait is the real question. When I use the term “we,” I am not referring to just the U.S. Nearly every allied country feels the way the U.S. government feels on this issue: North Korea needs to be stopped. 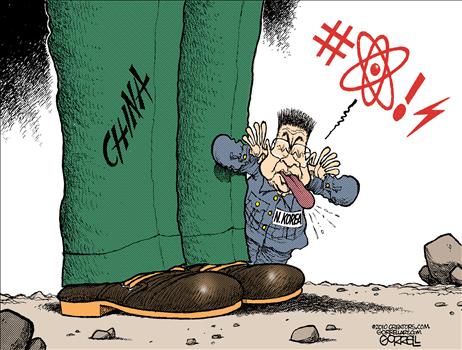 So why haven’t we done anything? Well, that’s the part that stops this debate in its tracks. China is essentially blocking any intervention the rest of the world may conduct. Recently, however, China and South Korea have stepped up sanctions against North Korea.

“China has barred a North Korean freighter from one of its ports and South Korea announced a crackdown on individuals and companies linked to Pyongyang’s weapons program, stepping up sanctions against the isolated state.” With its neighbors, and its only ally taking steps against the radical regime, there may be signs of an eventual end.

The end to a communist regime in the country would just be a start in the long, arduous process of creating a better life for citizens of the country. North Korea is famous for brainwashing its people, much like the communist nations of the past. Propaganda and government-run news media make the country seem like the best in the world. All of this while spreading the hate of the South and America. If you would like to see what the people of North Korea go through, this video shines a spectacular light on just what these civilians face when it comes to brainwashing.

In short, it is important to recognize the threat of nuclear missiles. However, no one in the outside world knows if the North Koreans have an arsenal. In the mean time, the world has bigger issues to focus on than an emotional, attention-seeking teenager of a country.

Who Will Represent The Eastern Conference In This Year’s NBA Finals?

NBA Round One Playoffs recap

Viewers Of ‘Masters Of The Universe: Revelation’ Can Be Assured That There Will Be Plenty Of He-Man In The Show, According To Kevin Smith

The Slap Seen Around the World: It's Time to Take a Stand Against Excessive Force in Schools